Chris came to rowing from skiffing which she’d taken up at the encouragement of her flatmate who was also a work colleague. “She rowed and skiffed,” Chris remembers, “So she said to me we can’t work together, live together and row together so I will row and you will skiff and then when we stopped sharing a flat together I took up rowing as well.”

She joined Weybridge Ladies RC in the spring of 1972, by which time she was already a highly accomplished skiffer.

Success followed rapidly, and she won in a coxed four at Weybridge Ladies Regatta in June. That autumn her four came fourth overall at the Women’s Fours Head, despite rowing in a clinker boat, and by the summer of 1973 Chris’s wins were coming thick and fast. “That’s why I was enthused about the whole thing,” she say, “Plus the fact that they were lovely girls as well.”

When the club got a letter from the Chief Coach of GB women’s Rowing, Penny Chuter, in the Autumn of 1973 inviting them to put forward candidates for the new squad, the members Chris’s four were the obvious choice, but in the end only she and her junior clubmate Pauline Bird applied.

She rowed in the GB coxed four at the first World Championships that included women’s events in 1974, after which she didn’t row again, although she continued to skiff. “I had the shortest rowing career in history,” she laughs. “Started in 1972 and retired as an international in 1974.”

Full details of Chris’s experience with the GB squad in 1974 can be found here.

Chris’s “retirement celebration” after their petite final. Clare Grove points out that the fact she’s smoking was a “momentary lapse” as she had long given up at this point after smoking a bit as a teenager. (Photo: Chris Aistrop’s personal collection.)

Regarding her decision to stop rowing after 1974, Chris explains, “That world championships or rowing in the squad put an end to my joy in rowing for many reasons. One was if I was to continue rowing internationally I would have had to have changed my job, and I loved my job. I worked in the shipping department [of Shell] which worked 24/7 – it wasn’t a job where you could leave at 5pm. And because I had to be on the water at Hammersmith at 6pm or whatever, I could never have done it without the absolute support of my colleagues who, if anything happened, took over and let me go rowing. They were wonderful!”

She continues, “Also I missed my life because I couldn’t skiff, I couldn’t go out with my mates, I couldn’t play netball or go horse riding, and all these other things that I’d got used to in my life because I’d started rowing so late – having a social life and enjoying life it all went out the window!” For that whole year it was rowing, rowing and nothing but rowing and I resented it, I wanted to go back to doing all the things I enjoyed doing.”

After 1974, Chris took on various roles on the administrative side of women’s rowing. She was Women’s Team Manager for the 1975 Championships at Nottingham, which she descries as a very minor role which she therefore thoroughly enjoyed. “I was really just there to make sure that I attended all the meetings to find out what was going on and that I imparted all that information to the crews and the coaches. I was very happy to be around rowing but I just didn’t want to commit the whole of my life to it basically.”

She also worked regularly as a volunteer at the National Championships and was a Selector from 1977-1980, but her most significant contribution to women’s rowing was as one of the group which founded Henley Women’s Regatta in 1988, for which she served as the first Chairman. After a breakneck six months setting the event up, she had to hand her role over to Margaret Adams after the first regatta as Shell then posted her overseas.

Today, she continues to coach at Thames Valley Skiff Club. 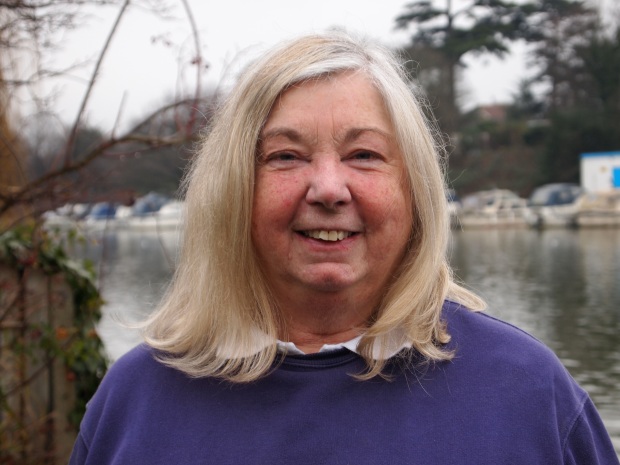 Chris by the Thames at Walton in 2017. (Photo © Helena Smalman-Smith.)