Like many people, Daphne got into rowing by accident when she went to Southampton University in 1958, although the exact reason why is pretty original. “I’d spent the previous year since leaving school as an apprentice with Vickers Armstrongs (Aircraft) in Weybridge,” Daphne explains, “And during that period I’d built a kayak in my spare time [as you do – Ed]. Arriving at university, I decided that the best place to keep the kayak would be either the boat club or the sailing club, and I happened to go to the boat club first. When they saw that I was almost six feet tall, they immediately said, ‘If you row with us, you can keep your kayak anywhere you like!’ And so I learned to row. I became the club captain in my final year.” 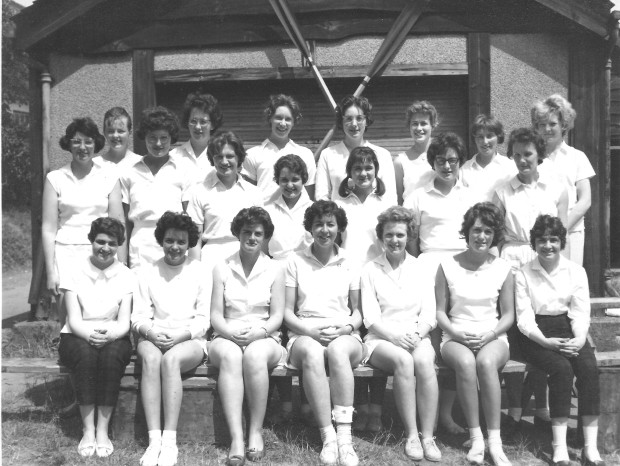 Southampton University Women’s BC 1961. Daphne is in the middle of the front row. (Photo: Daphne Byron’s personal collection.)

After graduating, Daphne moved to London to continue her apprenticeship at Vickers Armstrong and joined United Universities Women’s BC where she was affectionately known as Daff.

Ann Sayer was in a four with Daphne for her first outing with the club on 1 October 1961, and recorded in her training diary that it was, “Not a bad outing; Daphne obviously strong, so boat going round in circles (I object to being pulled round!) Daphne working hard and digging rather, but she wasn’t the only one with a fault.”

Later that winter, on 16 February 1962, Ann wrote, “Daphne’s first time to gym (thinks it is useless).” This may have been because she’d also been doing land training with the GB men’s Nautilus group – an incredibly radical concept for the time!

However, she must have been training reasonably effectively because she was in the crew which won at the WARA Head of the River Race (now the WEHORR) in April 1962 – the first of four consecutive headships she notched with UU from 1962-1965. In the 1964 race, Ann recorded that they had, “An extremely scrappy, bad start at miscalculated rate of 37. Began settling by Bandstand. Daff caught two minor crabs.” More impressively, though, she noted that when they won in 1965 it was, “Daff’s first time on bowside (except for yesterday) since beginning of 1962.”

Daphne can’t now remember why, but at some point she also took up sculling, which wasn’t something that most of the UU group got into (with the exceptions of Zona Howard and Vivien Roberts).

She won her novices at Bedford Ladies Regatta in 1963, was fourth at Weybridge Ladies Sculling Head in October 1964 in a clinker, and must have acquired a shell boat after that as she was using one when she won the Women’s Amateur Rowing Council Scullers Head of the River in 1965 with Alicia Arthur and Margaret Gladden tied for second. Alicia had rowed for GB in 1960 and would go onto do so again in 1966; and Margaret had rowed in 1964 and would be the GB single sculler in 1966, 1969 and 1970 and in the double in 1971 and 1972. Lists of domestic event winners from that era map very closely to our international team lists.

In 1965 Daphne also won Senior Sculls at Weybridge Ladies Regatta and the WARC Sculling Championship over the full Putney to Mortlake course in September, beating Margaret Gladden again. Penny Chuter, who had officially retired, had got fit for Bedford Ladies Regatta on 10 July and beat Daphne there, and did so again at the WARC Sculls Regatta on 13 July, but then withdrew from the fine boat racing scene once more.

With the perspective of her many years as an international coach, Penny credits Daphne with many of the qualities needed to be a top sculler: “She really had a mind of her own and she had the mentality for a single sculler rather than being a crew. She was… very athletic, very tall, very strong.”

Full accounts of Daphne’s international years can be found here: 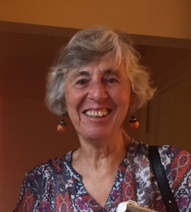 And the rest of her life

Late in 1965 Daphne was offered a job in Duxford, Cambridge and moved out of London (an entry in Ann Sayer’s diary for 21 November reveals that social practices amongst women rowers at the time were slightly different from those now as she threw a “farewell sherry party”). “I didn’t row after that,” Daphne explains. “After joining the company near Cambridge, a vacancy in their very small US subsidiary in Princeton, New Jersey in 1966 resulted in my dispatch across the Atlantic to become the manager – a fifteen month assignment. However, during that period I met and married an American, and the fifteen months became half a century! When I approached Princeton University boat club (in New Jersey) about the possibility of using their facilities, around 1967 or 1968, I received a definite negative.  They were not interested in any kind of women’s rowing!  So that was that.”

She got into sailing instead, she explains, “I’ve been racing a fifteen foot, two person sailing dinghy in the Albacore class for the last almost forty years! However, just a couple of years ago I had the opportunity to go out in a boat again at a rowing club in Oakland, California where my son was a novice. I had an evening outing in a novice eight and a more enjoyable trip in a single scull the next day. And I proved to myself that I could still do it half a century later! I also discovered that the introduction of carbon fibre into the sport has made the boats lighter, the oar blades larger, and the courses longer. The eight was even wired for sound and carried riding lights for night-time outings.”