Pauline is on the left in the photo at the top of this page, taken at the 1978 World Championships in New Zealand, which is © Don Somner.

Pauline was taught to scull by her father when she was 11. ‘Dickie’ Bird was an extraordinary man with a level of determination and application that was a strong influence on his daughter. He had to walk with callipers as a result of being born with ‘clicky hip’, a condition that is now generally cured very easily without surgery, but the treatment was not known then. Undeterred, he used his skills as an engineer to design a fixed seat sculling boat, and was both the first ‘adaptive’ sculler to compete in the Scullers’ Head in 1955 and the last person to race in it unaffiliated. With a vision for the value of long-distance single sculling racing, he joined Weybridge RC and founded Weybridge Silver Sculls in 1956 as the first sculling head on the non-tidal Thames, making the silver sculls that are the trophy, “From lumps of silver that he shaped on the gas stove in the kitchen,” Pauline recalls.

To coach his daughter, Dickie sat on the bank and got her to scull up and down in front of him, proffering advice each time she passed. Once she’d mastered the basics, he’d give her a point to focus on for the outing and send her off on her own. A typical session by the time she was 12 or so involved an hour at a rating of five, to focus on poise and control. [This won’t surprise those who row with her today who have experienced her mastery of low rate paddling in the stroke seat! – Ed.]

Pauline accepted the high level of discipline at such a young age because she was used to it. “My dad felt that sport taught moral lessons as well as making you fit,” she remembers, “So I’d already done a lot of judo, riding and swimming. I’d had my own training programme for swimming when I was seven. ‘Fun’ wasn’t in it, though I used to get a break in the middle of the session to mess about in the pool.”

When Dickie heard that next-door Weybridge Ladies ARC was keen to take on junior members to invest in the future of the club, Pauline was enrolled, although he had to lie about how old she was because the minimum starting age was 13.

“I learned to row sweep at Weybridge Ladies, taught by Sylvia Harper [who had rowed for England in 1951] and the legendary Amy Gentry mainly, but I carried on sculling at Weybridge with my dad as well,” Pauline explains. “Often I’d do a session in the single early in the morning and then walk over to Weybridge Ladies and go out tubbing or, when I was a bit older, in a four.”

Dickie wouldn’t allow Pauline to race until he considered that they were good enough technically that she wouldn’t fall apart under pressure. Her first official win was actually coxing a restricted double scull at WLARC Sculling Head in October 1969, but by 1970 she was competing in the event as a single sculler, and in 1971, aged 13, she won her novices at Hammersmith Borough regatta.

When a letter arrived at Weybridge Ladies in the summer of 1973 announcing that a new women’s national squad was being set up to form crews for the first World Championships that would include women’s events in 1974, Pauline felt that as she was the club’s top sculler, despite only being 16, she should have a go. “I honestly had no real thought of what that might imply; I just kind of breezed along.”

What followed was seven intense years representing GB, including at two Olympic Games. In 1977 Pauline and Astrid Ayling’s double scull was the first British women’s boat to reach for a World Championships final.

For the first two of these she was still at school, and remembers that her dad had negotiated for her to be able to do her winter midweek land training at home, rather than with the rest of the squad, so that she could also fit her homework in. “My dad put together a home gym in a very Heath Robinson sort of way, so in the morning I would do strength training for maybe 20 minutes or so and then I would go for a run in the evening, though I also had to do hockey and PE at school. Looking back on it now, it was all rather pathetic and amateur!,” she says.

After she left school in 1975 she got a job at Midland Bank in Hammersmith, which was convenient for training out of the then Amateur Rowing Association, where she also benefited from having a very supportive manager. “He’d been a high level squash player,” Pauline remembers, “And when he caught me falling asleep at my desk once, instead of sacking me on the spot, he asked me why. I explained that I’d done two mornings on the river that week as well as evening training, and he told me only to come to work at 10am!”

During training at the 1977 World Championships in Amsterdam. (Photo © Don Somner.)

Full accounts of Pauline’s international years can be found here:

The 1978 report also covers the infamous story of how Pauline and Astrid were entered under their maiden names in the (men’s) double sculls event at Henley Royal Regatta by Kingston RC, causing near apoplexy among the Stewards when they were tipped off, and a close shave for the Kingston men’s crews (including one which won their event) which could have been disqualified as a punishment. 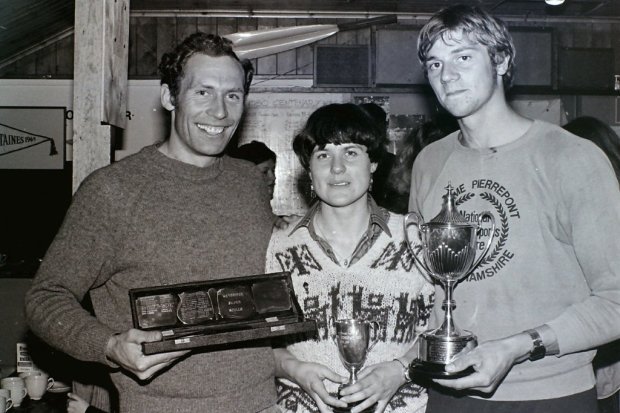 The 1980 season was a particularly brutal one, both physically and psychologically, Pauline explains, because she and Beryl Mitchell spent most of it vying for the singles slot, racing each other at international events, but also doing numerous trials against each other at home. Although Beryl was eventually selected after winning the final ‘best of three’ by a small margin, the whole process “tore lumps out of both of us,” and this led to Pauline stopping rowing internationally the following year. “I did begin doing the training that autumn, and raced at Weybridge Silver Sculls in October, but I’d also started my degree by then and I think I was very, very deeply tired. I had a kind of breakdown and even thinking about laying my hand on a rowing boat made me feel physically sick.”

The following summer it was her dad who helped her rediscover her love for the sport. “He was incredibly clever,” she recalls. “He was coaching a women’s crew at Staines BC and one day he said, ‘Look, I completely understand you’re never going to row again and that’s absolutely fine, but I’ve got this crew that I’m having a bit of a problem with and I wonder if you wouldn’t mind coming to just have a look?’ So I went out in the coaching launch with him a few times, and then a couple of weeks later he said, ‘I’m really sorry but one of the girls is ill – would you mind just subbing in?’ And he gradually sucked me back in to rowing. I’m eternally grateful that he did because I was much happier in the end as a result.”

“I finished up racing with the Staines crew that year, and for the first time ever, really, I was rowing for fun. They were some of the best races I ever had, and that I’m proudest of,” Pauline explains. “At the time Kingston were unbeatable, and I remember getting to the the final of Staines regatta where the rest of crew I was rowing with were saying, ‘Oh, it’s Kingston, they’re bound to beat us,’ but I said, ‘Well… let’s just see!’ So we went screaming off the start because often, with side-by-side racing, if you get a good length, people aren’t going to be coming back, and we held Kingston which they hadn’t really expected, and we kept holding them and then we got the last 250m and just went mad and beat them, which was a big, big shock. The girls I was rowing with were just so thrilled to have beaten Kingston, and it was really satisfying for me to have been able to make such a huge difference to that crew. So that was the sort of thing that I did for two or three years and it kind of rehabilitated me to rowing. That autumn I bought a single which was called Phoenix because it represented my rowing rising from the ashes. It was someone else’s suggestion but it was a great name!”

In due course Pauline joined Thames Tradesmen’s RC and later Thames RC, and in the autumn of 1985 agreed to do a pair for GB trials with Tessa Millar, one of the group she rowed with there. Although she initially had no interest in trying to get into the squad herself, she finished up being selected, and thoroughly enjoying a ‘bonus’ year, racing in a pair with Flo Johnston and also doubling up into an eight at both the Commonwealth Games and World Championships in 1986. “It was a brilliant year and I enjoyed it,” she says. “International rowing was finally fun too!”

The following year she actually trialled again, but the combination of having to do professional exams for her new job and tearing a cartilage in her knee made training – and getting to full slide – difficult. “At the Easter trials in Nottingham I was being pressurised to do a race almost as soon as I’d had surgery on it,” she recalls with frustration, “And I felt I was just being set up to lose. So I just walked out of the trials and never went back.”

Pauline competed internationally as Pauline Bird, except from 1977 to 1980 when she used the name Pauline Hart.

Other than a few years when her son was very young, Pauline has continued to row ever since, and competes regularly and successfully in masters events in the UK and abroad, often in crews with her 1974/75 GB crewmate Jackie Darling.

In the last ten years, after recovering from lung cancer, she has also enjoyed learning the skills of road cycling, and has completed various long-distance challenges.

Pauline (far right) celebrating a win at the 2017 World Masters Championships in Bled. The author is on the left. (Photo © Naomi Ashcroft.)