The photo at the top of this page shows Sue just after winning her silver medal at the World Championships in Montreal in 1992, and is from her personal collection.

Sue took up rowing in her early twenties when she found herself sharing a house in Barnes with a colleague. “I saw people rowing and thought, ‘That looks like a nice sport, and it’s probably a good way to a social life as well,'” she remembers. “So I contacted the what was then the Amateur Rowing Association and asked them what club they recommended. They suggested a couple so I went to a meeting at the first one but I felt it wasn’t for me, and then tried the second one on the list which was Thames RC and that was where I learned to row.”

Her first win in novice coxed fours at Weybridge Ladies ARC’s regatta in 1983 was followed by more wins in fours and eights over the next two years, and in 1986 she started winning in her single at winter heads too. This was after a rather inauspicious start to her sculling career, she recalls; “I fell in two Sundays running  off the embankment at Putney and actually it was fairly scary and at one point I thought I was going to be swept under Putney Pier, but it was all fine and obviously didn’t put me off!”

Sue’s decision to focus of sculling came about because, as a smaller-framed oarswoman, “There was a point when I felt I wasn’t ever going to be put in the first eight at Thames,” she explains. Having initially been coached by her then future husband Paul Davis and other club coaches at Thames, in 1987 Sue started training with lightweight international sculler Gill Bond who was coached by Bill Mason at Imperial College next door to Thames. After that, she says, “I never looked back because Bill took me under his wing.”

Sue trialled for the GB lightweight squad in 1987, gaining useful experience of how the trials process worked. She didn’t get in but went to the outrageously windy World Championships in Copenhagen anyway to watch Gill race there, gaining more exposure to the international scene as well as the Nordic weather. “We camped!” she laughs.

During the autumn of 1987 she sculled as part of a women’s lightweight group run on the Tideway by the ARA’s National Coach with responsibility for women’s rowing, Rosie Mayglothling. Rosie remembers Sue saying to her one day, “In the week I go really well, but at the weekends when I’m with you and all the others, I go really badly,” to which Rosie replied, “That’s because at the weekend you’re trying to race your opposition rather than thinking about how you make the boat go faster.” “When she got that, she clicked, and suddenly became a very fast single sculler,” Rosie says, to which Sue adds, “I really liked sculling from that point.”

Full accounts of Sue’s years in the lightweight four can be read here:

For the 1991 season Sue switched to the openweight squad with the aim of getting to the 1992 Olympic Games, but this didn’t work out. “I got into the eight and raced at Lucerne but then most of the crew was dropped because the decision was made to double up the four and the pair into the eight with just two of the original crew, and I was not selected.”

Undeterred, she returned to the openweight squad again the following year although she spent much of the winter training in her single. Lightweight Women’s Chief Coach Bill mason wrote later, “Significant improvement in technique was achieved through this period… Effective length of stroke was improved, greater symmetry at the catch and finish was achieved, and some improvement made to the recovery phase of the stroke.” This didn’t prove enough to get her into the Olympic team, though, and her time in the openweight squad ended after a training and selection camp in Banyoles in late April.

Sue then wisely decided that her best option for that season was to try and gain selection for the World Championships as a lightweight single sculler, but to do this she needed to lose 5kg and prove that she was faster than Sue Appelboom who had been the GB lightweight sculler in 1991. Three weeks after this unwelcome change of plan both scullers raced at Paris regatta where Sue Key won on both days, finishing ahead of Sue Appelboom, though by less than a second on the Sunday.

After that, “I trained in Henley with Ali Gill and Annabel Eyres who were the Olympic double,” she explains. “That worked really well: the three of us did lots of work in singles, and we also did pieces with staggered starts when they were in the double.” Ron Needs, who was coaching the double, also gave Sue some input, and then travelled to the World Championships with her.

Sue won the bronze medal in lightweight singles at Lucerne, beating the other Sue, which was enough to confirm her selection.

After three years in the lightweight coxless four, Sue very much enjoyed various aspects of being a single sculler. Perhaps chief amongst these was that she could be a little heavier because single scullers can compete at the maximum weight of 59kg, whereas crews needed to make an average of 57kg. “Dieting had always been where much of the angst was in the lightweight four so that was good, but the other thing was always, it’s down to YOU, and if you felt you’ve got something to prove which through that year I did, you can really use that,” she explains. “I was also an unknown in a sense because I’d changed boat class, so in some ways I had nothing to lose that season, which was good psychology.” All of this helped Sue to win the silver medal at the 1992 World Championships, GB’s first medal in women’s lightweight single sculls.

In 1993, although she chose to continued in the lightweight single, again coached by Ron Needs who was now working only with her, she found the challenges very different. “That year I definitely felt under quite a lot of pressure; having been successful I had became someone who people wanted to beat,” she reflects. “Another aspect was that in 1991 and 1992 I had that period of going heavyweight again which had let my body go back to something that was a more natural weight; although I’m not that tall, I wasn’t a natural lightweight, so it had also made training over those two winters easier. And by then I was just really fed up with the dieting. I had also enjoyed training in a group with the openweight double in 1992, but in 1993 I was on my own.” That year she finished eighth at the World Championships, missing a place in the final by just 2.36 seconds.

Full reports on Sue’s two years as the GB lightweight single sculler can be found here:

Sue raced in the new women’s sculls event introduced at Henley Royal Regatta in 1993, losing to Brenda Lawson from New Zealand who went on to win the gold medal in the openweight double sculls at the World Championships that year. She told the Guardian newspaper at the time, “‘I really enjoyed it, hearing people cheering me for the first time in my life.”

After the 1993 Championships Sue made a positive decision to stop rowing internationally. “Ron tried to persuade me to carry on and suggested I might try a crew boat again like the double, but I was reluctant. I’d got used to life in a single which is simpler in some ways because you only have to worry about yourself and your equipment, and it was much easier to fit round my job too without needing to accommodate other people’s schedules. Added to that I just didn’t have much enthusiasm for another year of being lightweight. I was also 34 by then, and I think it was coming to its natural end.”

Two silver medals from five years of international racing had been a major achievement. After winning the second of these, Sue sought to encourage the next wave of rowers at Thames RC, writing in the club’s newsletter, the Thames Journal, “I hope that my performance might inspire other, smaller, club-taught athletes – remember, the sky’s the limit!”

Sue then decided that she’d run the London Marathon in 1994 and set herself the goal of doing it in under three and a half hours, which she achieved, despite never having run a marathon before. After this she cunningly told herself that she didn’t need to run another one unless she would be able to do it faster, “Probably knowing that I was never going to do that because it was on the back of my whole rowing career!,” she laughs.

Sue continued to scull for pleasure from Thames after she had her family, but this understandably proved hard to fit in as her children got older. “But some years later I got to the stage where I wanted to do some exercise again and realised that I needed to decide whether I was going to go back to something I loved or walk away from it completely, so I signed up for one of Alec Hodges’ courses at Tideway Scullers to get my confidence back because I hadn’t been in a boat for however many years it was by then,” she explains. “The course was mad in a fun way because I finished up in quads with 14-year old boys, and I’ve never rated so high in my life! After that I thought, ‘I love this,’ so I joined Scullers and still enjoy getting out sculling when I can.”

Sue and Paul were delighted when their son Tom became the fourth member of their ‘Henley competitors’ family, following in the footsteps, or perhaps that’s the puddles, of both his parents and his older sister Lydia when he raced at Henley Royal Regatta in 2017. Sadly, their other son Oli, who died of cancer aged 16 and who had also briefly rowed, was not there to see either of his siblings compete. 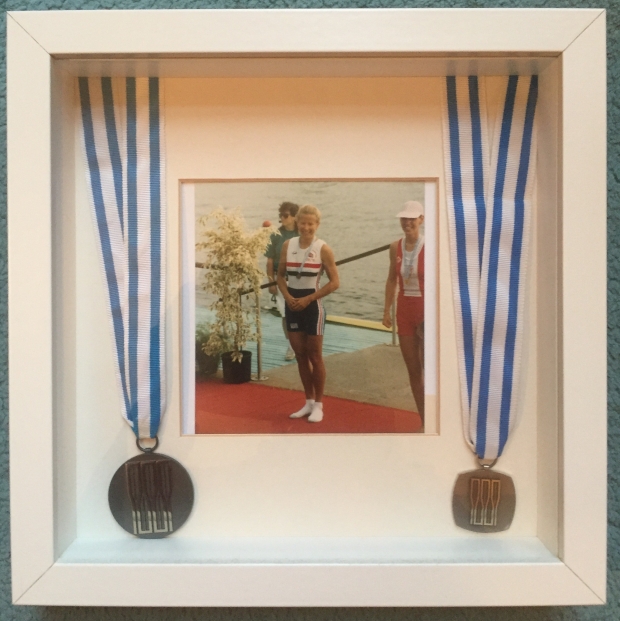 Sue’s two World Championships silver medals. These changed shape and size between her first one (1989, right) and her second (1992, left).