Dorothea was in her early 20s and training as a physiotherapist at St Thomas’s Hospital when she took up rowing. “I knew about it because my brother rowed for his school and then in the RAF so I thought I’d have a go myself,” explains Dorothea. She’d also been encouraged to try it by Dr Violet ‘Pug’ Cyriax, whom she’d met during her studies and who had been part of the famous 1938 women’s rowing tour to Australia. The event which finally prompted her to do something about learning to row was watching the Olympic regatta at Henley in 1948. With her interest thoroughly piqued, she says, “I got a rowing Almanack and looked up women’s clubs and the one I fancied was Barnes Ladies ARC – they’d had a very good season – so I asked if I could join them. There was a vacancy and I started!”

In 1954, the Women’s ARA decided that the way to get the fastest eight for the first official European Women’s Rowing Championships would be to put together a composite eight from the best oarswomen who put themselves forward. This is obviously a familiar concept today, but was completely radical at the time as the GB men’s team was made up entirely of whole-club crews and the very idea of removing an oarsman from his club for to train with a National crew was considered to be borderline unethical.

For the women’s team in particular the idea made a lot of sense, at least in theory. There were far, far fewer women rowing than men but also a disproportionately larger number of clubs (if you consider the number of members per club) because there was no one-to-one mapping between clubs and boathouses or even boats; a single boathouse could house many clubs, as was the case with Green’s Boathouse at Barnes Bridge where Barnes Ladies ARC was based, where boats often belonged to the boathouse operator and were just rented by the hour to the different clubs.

When the plan to put together the composite eight was announced, Dorothea remembers, “People said, ‘Oh why don’t you have a go?’ And I did and it so happened they had another place and we had a trial and I was in!”

Although her crew was selected in the late winter, it didn’t get any side-by side race practice as there were no women’s eights regattas by the time they were felt to be ready to race. Out of the five eights in the event at Women’s European Rowing Championships, which were raced over just four lanes because of the low numbers of entries, the GB crew was the one not to make the final.

After the 1954 Championships, encouraged by Pam Barber who had been the single sculler and was also a Barnes Ladies member, Dorothea left Barnes Lades and joined the United Universities Women’s BC (stern pair of the 1954 eight were from UU) as they had become the ambitious women’s club who were boating serious eights when Barnes Ladies just weren’t. She remained a loyal UU member for the rest of her rowing career, transferring to Thames RC when the club merged with them in 1973.

Dorothea stroked the UU eight that was selected as a club crew to be the GB eight at the 1957 Women’s European Rowing Championships (the idea of a composite having been abandoned by this point because although it theoretically produces a better crew, the logistics involved in doing so outweighed the advantages). This time they did a lot of racing in preparation although this was mostly only against domestic opposition, but they scored a pleasing win against a Dutch club crew at the Serpentine Regatta.

Everything was looking much more promising until they set off for the Championships which were in Duisburg in Germany. During the course of a long boat and train journey, Frances Bigg, probably the strongest member of the crew, became unwell and retired to bed with flu-like symptoms as soon as they arrived. In fact, it wasn’t flu but polio and Dorothea, who had professional experience of working as a physio with polio sufferers as the disease was rife at the time, suspected this. She insisted that Frances was isolated that night, didn’t row in the training outing the next day, and was taken straight to a doctor, who confirmed her diagnosis. Exercising can increase the chances that the sufferer is severely paralysed, and although Frances suffered from some issues with her hands, she was able to resume her career as an orthodontist, which almost certainly wouldn’t have been the case without Dorothea’s expertise and quick thinking.

With a sub in the crew, and only four entries in the event, the GB eight sadly finished last once again.

Dorothea really relished the opportunities that both the 1954 and 1957 Championships afforded to meet women rowers from behind the Iron Curtain. Several of them stayed on at the Duisburg event to watch the men’s racing which followed the women’s competition, and were joined in their houseboat accommodation by the Hungarian sculler Cornelia Pap. Somehow evading Pap’s minders, Dorothea then managed to get Pap back to Britain with her for a weekend at her family’s cottage in Lymington in the New Forest.

Dorothea (in white), who stroked the GB eight, with the stroke of the Russian eight at the 1957 Championships in Duisburg. (Photo: Dorothea Cockett’s personal collection.)

After 1957 Dorothea carried on racing with UU domestically, winning non-status fours at Reading Working Men’s Regatta, women’s fours and eights at the News of the World Serpentine Regatta and the Women’s ARA Fours Head in 1959. She was also on the committee of the Serpentine Regatta, of which she says with the typical casual positivity of high achievers, “It was fun – we had lunch with the committee then raced!”

She was in the top UU boat for the heads in early 1960 too, but she dropped out in May after the eight’s first trial for the Women’s European Rowing Championships. This took place on the day her engagement was announced in the Telegraph. Her crewmate Frances Bigg noted at the time that, “No one said a word, including Dorothea,” though it’s unclear whether her reticence this was from modesty or not wanting to distract the crew from their important race. “I got married in July of 1960 so I had to decide early to go to give the new person (Vivien Roberts) a chance to get used to the crew,” she explains.

Her wedding cake was decorated with both oars and sailing boats to reflect the bride and groom’s sporting interests.

Her marriage to surgeon Frank Cockett, who was a widower with three children, left Dorothea less time to row, especially as she then had twin sons in 1961. She continued to work for a while, but in those days women paid income tax at their husband’s marginal rate, and as Frank had a good salary, it eventually made no financial sense for Dorothea to carry on.

However, once all five children were all at school, and although she was involved with various charities at St Thomas’s Hospital (for which she was awarded the MBE in 1998), and was teaching physiotherapy, she also found time – incredibly – to help coach a girls’ school which was rowing out of the Civil Service boathouse where UU were based.

Although the coaching itself was straightforward for her, the issue of remuneration was tricky. The school expected to pay her as it would any other member of staff, but Dorothea realised that if she accepted the money she would never be able to race again because, until 1983, the Amateur Rowing Association rules barred anyone from doing so, “Who has ever taught, pursued or assisted in the practice of rowing… for profit.” Interestingly, school teachers were not so barred, but only if their coaching was done “in addition to academic subjects to pupils of his own school,” and as Dorothea wasn’t a teacher there, this didn’t apply in her case. A satisfactory solution for all concerned was reached by the school making a donation to UU instead of paying her.

Having raced at the first Women’s European Rowing Championships in 1954, Dorothea also took part in the first British National Championships in 1972 at the new Holme Pierrpont course, coming fourth in the coxed fours, and had won at Reading Amateur Regatta the previous year too (from a field of seven crews). She admits that her land training at the time was largely “family life” and “gardening”, but she continued to enjoy rowing, especially when veteran categories were brought in.

Comemorative plaque given to all participants. 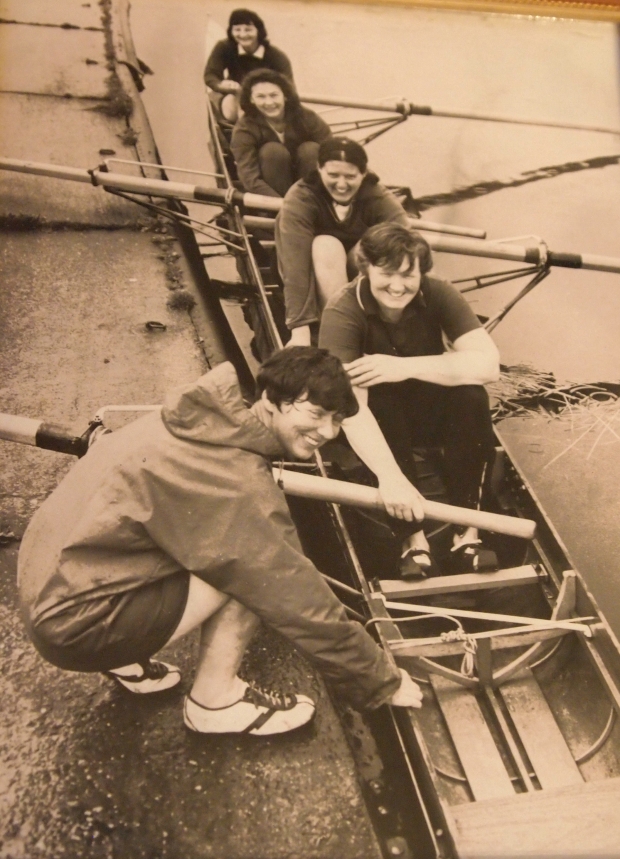