The photo at the top of this page shows Kate (left) rowing with Belinda Holmes in their GB junior pair in 1980. (Photo: Kate Panter’s personal collection.)

Kate learned to row at Weybridge Ladies ARC when when was 13 or 14. “My older brother had been rowing at Kingston Grammar School and then at Cambridge so I’d been to watch him at some regattas and know what rowing was, and I think my mother decided that I ought to do some exercise so she took me along to the club. Amy Gentry was there in her long coat and wellington boots, and she took me out for my first outing in a tub.” The club was an ideal environment for young rowers at the time, she remembers, “There was such a nurturing, grass roots set up there with a lot of older women who really looked after the juniors; they’d go out in boats with us, and when the water was bad they’d take us out in an eight so we could get out on the water. We used to do circuit training with the adults in a church hall in Oatlands.”

Kate’s first win was in 1976 in under-16 coxed fours (although she was only 14 at the time) at the open regatta which Weybridge Ladies ran, and over the next three years she picked up more wins in fours and the occasional eight. By the 1979 season, Kate and three other of the club’s keenest and most capable juniors – Jane Cross, Belinda Holmes and Joanna Toch – had been put into a four together, although Kate and Belinda were a year younger than Jo and Jane. “There had been quite a lot of attention paid to trying to give everyone options, keep us in bigger boats and not letting us four row together but in the end we were in a four,” she recalls. “We were coached by Bill Stagg, who was a tiny, wispy guy with bright eyes and he really looked after us. We never learned to tie boats on trailers or anything – we were complete princesses is my memory!” 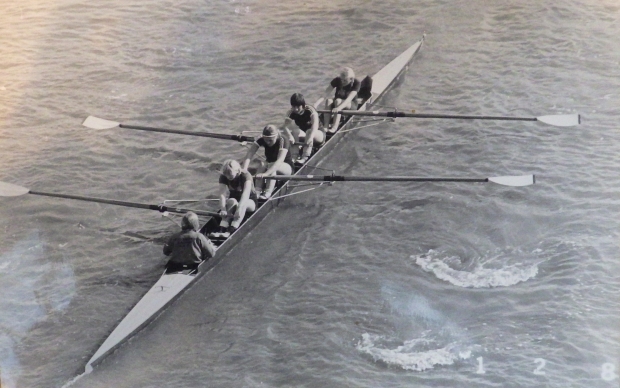 The foursome worked really well together and quickly developed a well-deserved reputation. This brought them to the attention of Dan Topolski, who was the new GB women’s senior squad Co-ordinator. With the aim of developing them further by giving them a level of challenge that they weren’t getting on the junior circuit, he invited them to join the squad at some of their training and assessment weekends, and they also went to Salzgitter international regatta with the GB senior women. “Dan was very enthusiastic and very supportive of us and coached us a little bit too,” Kate recalls, “He invited us to go and have tea with Oxford after the boat race, and he was just terribly including, which at that age was very encouraging. ”

In due course, and the crew’s memories of how and why this happened vary as well as being hazy, John Biddle came in to coach them instead of Bill Stagg.

The four and their new coach made a bold plan to treble up at the National Championships in the summer of 1979, and they pulled off an impressive set of results, winning junior coxed fours by a comfortable nine seconds which secured their selection for the World Junior Championships (then called the FISA Youth Championships) in Moscow, as well as coming second in senior coxed fours by a mere three seconds, and then romping home in junior eights by 15 seconds.

1979 was only the second year that women had been included in the FISA Youth Championships but the coxed fours nevertheless attracted a healthy nine entries including crews from the dominant women’s rowing nations – the USSR, East Germany, West Germany, Romania and Bulgaria. Kate remembers being struck by the size of some of their Eastern bloc competitors. “At first sight these girls looked vaguely in proportion but then we’d stand next to them in the showers and they’d be a foot taller than us and hairier too.”

The GB crew finished eighth at the 1979 FISA Youth Championships, beating the Canadians comfortably in the small final.

The next season, 1980, Jo and Jane joined the GB senior squad and were selected to race at the Moscow Olympic Games, while Kate and Belinda continued as juniors in a pair, coached again by John Biddle, and again being included by Dan Topolski as a “satellite” part of the senior team, as Kate describes it, and racing at Copenhagen International regatta.

After going so well in training that she remembers Dan telling them he might take them to the Olympics as the GB pair, things started going wrong for the young crew in the run up to the FISA Junior Championships in Hazewinkel. First their boat was written off and they were badly shaken by a collision with a barge while training at home in Walton. Then they were unable to find a replacement boat that was the right size for them so had to cope with one that was too large, and finally, when they were leading in their straight final at Championships, one of their gates failed and as the oar came out the boat overturned.

This outcome was a huge disappointment for both of them; as realistic medal prospects, they had hoped that they would be able to win British women’s first medal since the start of the World Championships era in 1974, and with no medal any possibility of going to the 1980 Olympic Games was gone too.

After leaving school, Kate spent the following autumn term doing land training with the senior squad and applying to Cambridge to read medicine, but once she secured her place there, she decided to withdraw from rowing for the rest of the academic year after her intense junior career.

When she arrived in Cambridge she was quickly given a place in the blue boat and won three successive boat races, of which she’s most proud of the second because, “We were a length down and we had to row through to win.” She was the first female GB junior to win a rowing blue. As she went straight into rowing with the blue boat squad as soon as she got to Cambridge, and rowed for GB in the summer terms of her second and third years, the only opportunity she had to get involved with her college boat club, other than socially, was in Mays in her first year, 1983, when her four notching up an epic ‘over bump’ (when a crew bumps a crew that started three places ahead of it after the two crews that started in front of it have bumped out), though admits that this was relatively easy as Downing had only had women since 1980 and so they were starting almost at the back.

In her final year she persuaded Mike Spracklen, whom she’d met by being in the GB team in 1983 when he was coaching the men, to be the finishing coach for the Cambridge women’s blue boat. “I loved Spracklen’s coaching,” she says, “And he was a great supporter of our Olympc pair too.”

Partly because of GB squad policies at the time and partly because of her own sheer hard work (with only minor collateral damage to her exam results) Kate managed to pull off the feat of rowing for GB twice (including at an Olympic Games) as well as getting three blues and a degree while she was an undergraduate.

“For the 1983 and 1984 seasons, my memory is that when I was at home during the holidays, I trained with the GB squad,” she says. This kept her sufficiently ‘in the system’ that once Cambridge rowing was over for the year in mid-June 1983, she was selected to row in the GB eight, and raced with it at Amsterdam and Lucerne regattas, the National Championships and then the World Championships in Duisburg. She was also one of eight finallists across all sports in the Scholl Young Athlete of the Year Award.

The following year she continued to train with GB when she wasn’t in Cambridge but injured her back at a GB weights session shortly after the boat race in late spring; the Cambridge squad had wound their weights down for that, but GB were obviously at a different point in their training cycle and she came to grief lifting a much heavier weight than she had for the previous few weeks. This put her out of the contention for a time but she eventually won selection for the 1984 Olympic Games in Los Angeles, rowing in a pair with Ruth Howe. Looking back on her path to the Olympics now, Kate reflects that her decision to continue with her third year at Cambridge instead of taking a year out to train full time with the squad in London, was rather reckless and could easily have cost her the chance to row at the Games.

Full reports of Kate’s years on the GB senior team can be found here: 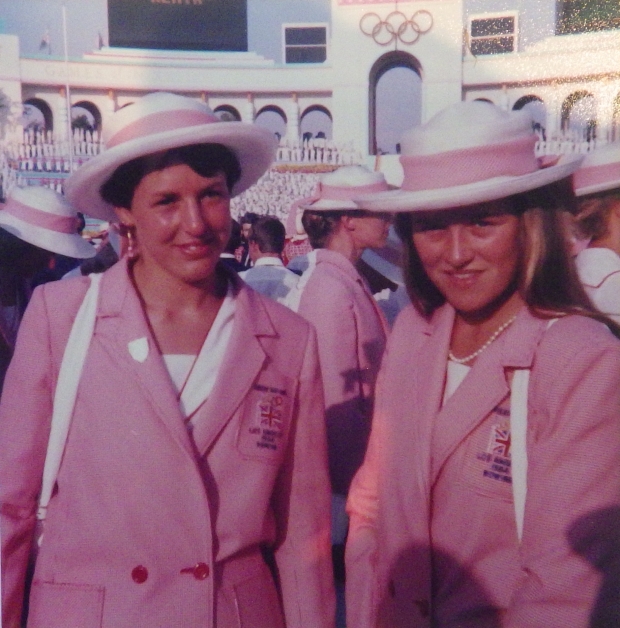 After the 1984 Olympics Kate moved to London for her clinical training at St Thomas’s hospital and although she continued to row for the first few months she rapidly realised that this wasn’t really compatible with working night shifts. In addition she wasn’t convinced that her back would hold up for another four years or that, given the GB women’s rowing set-up which struggled to attract coaches on a long-term basis and was short of money too, there would be any greater chance of a GB women’s crew getting a medal anyway. This was a view shared by several of the other members of the squad around then, as it turned out correctly. So after doing Nottinghamshire International and the National Championships one last time with Heather Brown and Kate Grose, with whom she’d rowed for Cambridge, Kate made a positive decision to stop rowing and focus on her medical career.

She continued to take an interest in the GB rowing team, though, and watched with great pleasure as her Cambridge crewmates Kate Grose and Kareen Marwick, went on to have extended international rowing careers. “I’d tried to share what I’d learned through doing so much serious rowing as a junior with them, and I was really proud to see what they did afterwards. They had the appetite, perhaps because they hadn’t done it for years as a junior first,” she reflects.

In recent years the WLARC junior four of 1979 has got together again for occasional rowing outings. “We’re all still very close, and when we go out we’re like sort of siblings,” Kate says. “We’re all really different and we always were; Joanna is a real ideas person and Jane Cross, who stroked our four, is the practical one who makes things happen. So at the end of the outing when we’ve all had a great time, Joanna and I will say, ‘Let’s go out next week!’ And Jane will say, ‘Well, let’s try for an outing next year,’ and that’s what happens. I’m proud of that four because what we did then was pretty amazing.”

Kate also rowed in a Downing College reunion crew at the Head of the Charles recently, as well as doing some quadding with her brother. “I’ve found that when I row I can still remember every nuance of what I should be doing through the stroke,” she says. “I may not do it perfectly but I certainly haven’t forgotten how to do it.” So the rowing bug seems to be drawing her back to the river, which can only be a good thing for masters women’s rowing.