The photo above shows Liz on the left with the rest of the coxed quad in which she competed at the 1974 World Rowing Championships in Lucerne.

Liz started rowing towards the end of her second year at Durham University [what kept her? – Ed.] when three of her friends persuaded her to join them to make up a four. A year later, she was the only one still hooked and had had to take to sculling as a result.

She sculled a bit at home in the holidays at Leicester RC where she was the first woman member, and then went to Cambridge to do a PGCE. She won the 1969 women’s Boat Race, which was the first one in which Cambridge rowed with macon blades.

Soon after that she married fellow rower Tony Lorrimer. In due course the couple moved to Gloucester (with their single sculls Anthony and Cleopatra) and then, with impressive dedication to rowing, to Nottingham BC to be near Holme Pierrepont which had just opened, not realising how loathed a location it would become, of course. She became the first female member of Nottingham BC too.

Liz represented England in the single sculls at the Home Countries match in 1971, which she won. She also won the singles and the doubles (with Jean Rankine) on the Sunday of the first Nottingham International Regatta in 1973 [the results in the Almanack are incorrect, having duplicated those of the previous day and Liz has the medals and newspaper clippings to prove it! – Ed.]

Liz’s first encounter with GB rowing was in 1969 when she did a trial in a double at Weybridge with fellow Cambridge Blue Beatrice Scorer, but they were beaten by a St George’s/United Universities crew of Elaine Steckler and Jean Rankine who were not deemed fast enough to be selected anyway. Bea Scorer then moved to Uganda so that was the end of that.

She got into GB rowing properly, though, when the first Women’s National Squad was started in late 1973, and from quite early on Chief Coach Penny Chuter had Liz training in a double with Derby RC member Lorraine Baker, based in Nottingham (the rest of the squad were in London) and coached by Tony. Lorraine couldn’t actually scull, and Tony remembers some heated discussions about why they had to be in a double not a pair. The main reason turned out to be that several of the London-based oarswomen had already been earmarked for the pair (although exactly who was to be in it wasn’t finalised until the April 1974 trials), so the only real option for the Midlands duo was sculling. However, Penny also thought that although Liz was a good sweep rower, she was better sculler.

The ‘Midlands double’ trained in a quad with a Thames-based crew on previous few occasions which were always in London, because that’s where the boat was and also, probably, because one of the Thames double was a junior.

In Penny’s own words, the women’s squad initially had to rely on a “postal information service”, with training plans sent out to those who couldn’t train out of the ARA’s headquarters at Hammersmith. Although this should have worked in principle, it didn’t always for the squad’s midlands outpost. “She sent us weight training schedules and things and training programmes which we were supposed to go out and do,” Liz remembers. “And I distinctly remember struggling with these very heavy weights for weeks on end, and then when we went down for a training session, we were told, ‘Oh yes, they’re much too heavy, we cut it down by ¾ for everybody,’  but she hadn’t bothered to tell us! Mind you, it probably did us good because we’d lifted these heavy weights for weeks.”

A full account of Liz’s experiences representing GB in 1974 can be found here.

Liz is the first woman to have won a rowing Blue and also represented GB.

Liz and Lorraine continued to be part of the GB squad the next year, travelling frequently down to the Thames to train and race. They were second at the Head of the River Fours in November 1974, and Liz was in the squad crew that won the Women’s Head in March 1975, beating a second squad eight with Lorraine in it by 28 seconds.

After the April trial, the Nottingham double got a letter that said, “We should like you and Lorraine to continue training with the squad as a double to go to either Mannheim or Ratzeburg and to continue as a double until the National Championships at least. On the results of the squad racing at the championships and earlier regattas a decision will be made [regarding selection for the World Championships]. We have found the geographical location problem very difficult to overcome and knowing what the end of terms are like [Liz was a teacher] we decided not to ask either or you to travel so much this year during term time.”

They did go to Mannheim but were last in their heat each day and Liz’s album has “Bust up!” written next to the results. They raced at Nottingham International a month later, but were beaten by Diana Bishop and Jean Rankine (who wasn’t part of the squad) and by then Lorraine had been diagnosed with glandular fever so they didn’t continue after that.

In and amongst having four children, Liz gained a silver Coaching Award in 1974, and was a Selector from 1976 to 1980, taking the role of Chair in 1977 and 1978. The latter was a particularly difficult year as the World Championships were in New Zealand and it was therefore very expensive to send crews there. Eventually, the Selection Board decided that only the double of Pauline Hart and Astrid Ayling should be sent, but as Liz remembers it, the ARA hierarchy was inconsistent in their input to the process. “It was fairly grim because basically they didn’t want us to send anybody [else] because the standard wasn’t high enough. And then when we didn’t select anybody, we got into trouble for not sending people,” she recalls, to which Tony adds, “When there was muck in the fan they all disappeared.” 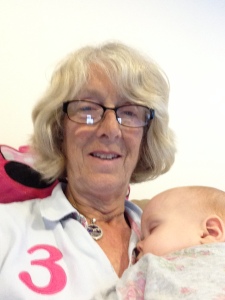 Tony got into rowing at Royal Shrewsbury School in 1959 because the only summer sports options were rowing and cricket, and he couldn’t play cricket because he had hay fever. He started coaching when he left school and has rowed and coached ever since. He gained a Gold level Coaching Award in 1975.

Liz and Tony are particularly proud of a bronze medal that a Nottingham eight got at the National Championships in 1979 which, she says, was, “Basically people we’d taught to row.”

He was added to the Roll of Honour at the 2016 Nottinghamshire Sports Awards and won the silver medal for his age group at the European Indoor Rowing Championships in Paris in 2017. He is President of Nottingham RC and Chairman of the Head of the Trent.

Tony gave his sculling boat Anthony to Beckett School in Nottingham but it has since disappeared. Liz sold Cleopatra to Jackie Darling, another member of her 1974 GB quad. It now belongs to Weybridge RC where Tony saw it not long ago and was delighted to find that, “It’s immaculate!”