The photo at the top of this page shows Liz (right) with Gill Webb after they won the silver medal in the coxless pairs at the National Championships in 1978. (Photo: Gill Parker’s personal collection.)

Liz took up rowing because someone offered her a beer. To be fair, there was more to it than that…

When she moved to London to start her first job, she shared a flat with two other young women, but quickly found that their main topics of conversation and leisure-time activities centred round make-up, the latest fashions and attracting young men because of these. “I thought, ‘I’ve got to find something else to do,'” she says. As she was a civil servant, she headed to the Civil Service Sports Ground at Duke’s Meadows in Chiswick [you can see where this is going, can’t you? – Ed.].

To her disappointment, she realised that, “All the sports they offered there were things that I already knew from experience at school I couldn’t do because they involved hitting things or catching things, but I think I’d heard about rowing from a colleague, so something made me say, ‘What about the rowing club?’ So the people at the sports ground said, ‘It’s just over that little bank.’ So I went over the bank, and knocked on the door very nervously. The door was opened and somebody inside said, ‘Oh, you’re the right size, would you like a pint? And that was it. I was in! I was in rowing!”

“I didn’t actually start right then, I started after Christmas, so it was January 1976, and pretty cold,” she adds. “And having managed to go through school and university without doing anything particularly sporty, I didn’t have any sports kit so just turned up in a pair of shorts. But Bob Dowson, who was the boatman, explained that my little bare legs with goosebumps all over them were inappropriate and I should get a track suit so I went off to Lillywhites in Piccadilly and got myself this lovey woollen tracksuit which kept me very toasty, although it wasn’t as good as modern Lycra because when it rained you got very soggy and heavy.”

She got no hint that first summer of what was to come, but thoroughly enjoyed herself nonetheless. “There was me and two other quite tall girls. There were three of us trying to make up a four,” she explains. “We just randomly got people to be the fourth person and we always came last by a long way. It was totally humiliating but great fun and it didn’t put me off.”

“Then I started doing winter training which was obviously a whole new ball game, especially as I’d never run. All we had to do was a warm up run to to the bandstand which is only 200 yards away from the club, but to me it was just terrifying! But I discovered I could run which was something I didn’t know. I remember Chris Grimes [who rowed at the World Championships in the coxed four in 1974 and 1977] saying to me at some point during the winter of 1976-1977, ‘You don’t realise how lucky you are – you’re getting better and I’m just getting older and slower.’ And I hadn’t really thought about it until then, but I was getting better. I was getting fitter, I could do it, and it was fantastic – I’d found a sport I could do. We won our first race that December in the Business Houses Head when we were given the ancient clinker eight while the top crew had a nice shell eight, and we still won!”

She also learned a lot from racing Oxford and Cambridge crews in another private match. “There was a tradition of sending Civil Service crews to race against Oxford or Cambridge. I think it was an eight, it might have been fours, and as long as you were a civil servant you could join in the eight, so I finished up rowing with people who were all a lot better than me and we won very easily both in 1977 and 1978. My recollection is they were very easy days out when you didn’t actually have to do much and then suddenly Oxford and Cambridge got their act together and don’t think it happened again after that.”

While Liz was busy taking her first strokes in her novice four, several of her clubmates were selected to row at the 1976 Montreal Olympic, the first Games to include women’s rowing events. “I was totally inspired,” she says. “And there was also this amazing four of people who hadn’t been selected for the Olympics who used to go round the country winning everything. They’d head off on a Friday evening and they’d come back with all these medals and tankards the following week and they’d just had a ball, and I thought, ‘Ooh,  that’s what it’s all about.”

Taking the next step

At that time, Civil Service Ladies RC was one of the top clubs for women, so Liz was pushed along what would nowadays be called a development pathway, but certainly wasn’t then. “By the time the autumn of 1977 I was told, ‘Well, obviously you’re going to go to international trials, aren’t you, because that’s what happens next?’ And I thought, ‘Am I?’ And the next thing I knew I was in Nottingham doing races in pairs!”

Although Liz got into the coxed four in the 1978 season and raced at several international regattas (including in a pair at Lucerne), in the end the crew wasn’t deemed fast enough to go to the World Championships which were in New Zealand that year.

She then rowed in the eight at the World Championships in 1979 and at the Olympic Games in 1980. Full accounts of those years can be found here:

As well as being tall and strong, one of Liz’s major contributions when she was in the squad, according to her crewmate and friend Rosie Mayglothling, was her ability to keep a broad perspective when things were getting fraught. “There were lots of occasions when something was said and people were getting wound up about it, and Liz would just say, ‘Oh for goodness sake, don’t be so ridiculous.’ and she’d just deflate the whole situation.” She still does this very effectively, and without a doubt, Liz’s balanced approach has led to her looking back on her time as an international athlete as a totally positive experience.

Liz stopped rowing seriously after the 1980 Moscow Olympics, “Largely because my job at the Centre for Overseas Pest Research was quite important to me and I was expected to go overseas quite a lot so it was hopeless.” She adds, “But I stayed a member of Civil Service Ladies RC and while I was pregnant I used to cox. I really love coxing but nobody ever wants me to do it! When Thomas was seven weeks old I turned up to Nottingham for some Masters regatta and just asked someone to hold the baby while I raced – and we even won! And when Alastair was about the same age I did the Head of the River Fours which I thought was a fun thing to do because it’s quite nice to go and have a row… but with no serious training.” 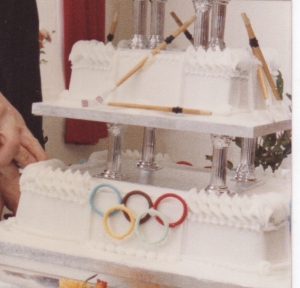 Liz and her husband Lawrence, a Cygnet RC member and whom she’d met at work, moved to Rochester in 1988, and by about 1992 she’d, “Plucked up courage to go and join Medway Towns RC,” and over the years she scraped together various crews for the Women’s Eights Head, and kept fit, mostly by cycling to work or by running the long way round to pick her sons up from school, via a five mail route through the local countryside.

The next important phase of her rowing life began with a phone call from Rosie in 1997 asking her if she was free in early September. “Why?,” Liz asked. “You’re coming to the European Masters Regatta in Munich!,” Rosie replied. Rosie had realised that a number of women she’d rowed with or coached over the years and were now of an age to race at veteran/masters level happened to belong to quite small clubs where they had no opportunity to race with others of their standard and age. Her solution was to bring them together in composite crews (the group always wanted to represent their clubs but were known collectively as UK Gold) for major events. Although these combinations suffered from only rarely being able to practice together, they were at least able to draw on the bonds developed by their long histories of racing together when they were younger.

This was the start of fifteen very enjoyable years of racing at home and all over Europe which saw the standard and popularity of veteran women’s rowing shoot up both in the UK and abroad.

Liz (fourth from left) after winning Masters C eights at the World Masters Championships in Zagreb in 2007. The author is at the front. (Photo © Vicky McDougall.)

Liz has done less serious veteran racing in recent years, partly hampered by a hip problem, although she did row in a Masters G crew at the Women’s Head in 2017 along with her 1979 and 1980 team mate Pauline Peel and other former internationals.

She continues to coach and be a very active committee member, especially since she retired, at Medway Towns RC, and has as much enthusiasm and love for the sport as she did during her international years. Liz still very much prefers one blade to two, has never done a 2,000m side-by-side race, and has a well-deserved reputation for providing her crews with top-notch flapjack on race days.

She also runs the Friends area at Henley Women’s Regatta.