Margaret, known as ‘Mac’ by all her rowing friends, started messing about in boats at an early age. “I learned to row was about five,” she remembers. “Every summer we went to Bembridge on the Isle of Wight where we had relations. We had miniature dinghies and as soon as my hands were big enough to hold oars, my father taught me to row.”

Her progress into racing boat rowing stopped and started a couple of times, but got going seriously around 1957. “After I did my degree in horticulture I did a teacher’s diploma at King’s College London and I saw they had a rowing club, and I thought, ‘Ooh, that might be worth trying!’ and I liked being on the water, so I went back into it then. But this was only for a year. “And then I migrated away with jobs all over the place.” In the middle of that phase she briefly belonged to  what was then Bath Ladies RC, “And then when I came back to a job near London I joined United Universities Women’s BC and went on from there.”

When she says “near London” she actually worked as a lecturer in Kent, so she was one of the longer-distance commuters in the UU group, and drove up to the Tideway for all their outings – a massive commitment.

Mac in 1965 at Brent Regatta on the Welsh Harp regatta with a brass cone ‘megaphone’ strapped to her head. (Photo: Ann Sayer’s personal collection.)

Before she got sucked into coxing all the time, she learned to scull and even competed in Novice sculls at Weybridge Ladies Regatta in 1957, but only in the first round.

The United Universities group were a massive presence in domestic and international British women’s rowing throughout the 1960s but particularly from 1960-1965, providing a level of continuity in GB crews that is rarely achieved even today in larger boats. Mac was the cox in all five of the years when a coxed UU boat competed (in 1963 there wasn’t one because not enough of them were prepared to self-fund the cost of a trip to Moscow).

Full reports on each of Mac’s international years can be read here: 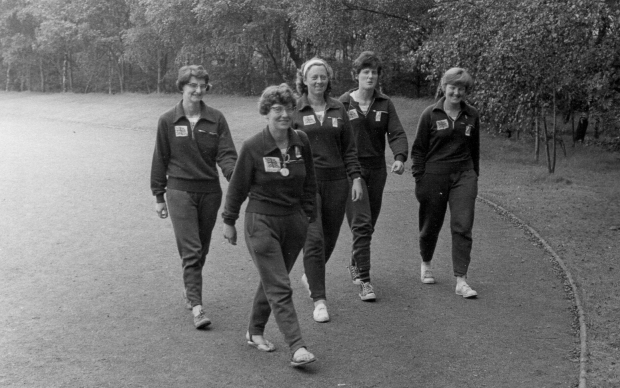 Mac’s involvement with rowing after completing her international career was full and varied. The UU group continued competing domestically in the late 1960s because they enjoyed it. One of their favourite events was a trip down to the coastal championships. “We won the coastal championships on several occasions,” she remembers, “We borrowed a boat. And we could cope with most boats.”

In the 1970s the UUs increasingly became involved with the administrative side of rowing; Mac was a volunteer in the regatta office when the World Rowing Championships when were held in Nottingham in 1975 on the new Holme Pierrepont course. “A lot of the Eastern bloc officials were the people we’d rowed against,” she explains. “I was sitting in the reception desk at Nottingham when a lot of them came in and several of these people said, ‘Oh, it’s Margaret!’ and walked across and kissed me. And the other [British] officials couldn’t understand what this was all about. They didn’t like it either!” She also finished up coxing in the usual ‘fun’ official’s race on the last day and recalls with great pleasure that, “Due to the connivance of the Swiss gentleman who was the President of FISA, the ladies in the office won that year, beating about six crews all full of ex-Olympic people!”

Mac qualified as an umpire in 1972, as did most of the rest of the UU group. On one occasion, they were competing in a four at Walton Regatta when their opposition failed to turn up on the start and so were disqualified. “The starter said, ‘We’ll just wait for an umpire to start you.’ And I was able to say, ‘Do we really need to? We’ve ALL got umpire’s licenses.’ And he said, ‘Well I think you can go.’ So we did!”

She was also Secretary of the South East Region; “Lower Thames and the coast down to Worthing, I think, and I had to set up all the coastal regattas. You had to work out all the tide tables to find the right Saturday.”

“I was a qualified coach,” she continues, “And I was press officer to the Women’s Rowing Council when there was one. And then I was Press Officer to the National Championships for years. I was also the archivist for ten 10 years. And I finished up as President of the University Women’s Rowing Association.”

When United Universities merged with Thames RC in 1973, she coxed their eight, ‘Quarry’, in a ceremonial row from its old home in Chiswick to its new one in Putney, and became one of the first female members of Thames.

She also continued to do a bit of sculling. “All the years everybody was migrating away from international crews, I sculled but I have no fighting urge,” she explains, though adds that she’s happy to fight so long as someone else is doing the work. “I can’t be bothered but I just like being on the water. I did paddle about in a sculling boat on Bewl Water [in Kent]. And I had a sculling boat which I kept in one of the oast houses at work [Hadlow College] and used to take down to the river.”

Alongside all of this, Mac also did all sorts of things in her village – “helping with Rangers, Guides, Brownies and ringing the church bells” for which she was one of the recipients of Maundy Money in 2011. “The service was in Westminster Abbey,” she remembers, “And it was the Queen’s birthday so afterwards we were able to sing Happy Birthday and she drove off laughing.”