Sue learned to row in September 1973 at Barn Elms through a programme it ran with local schools, including hers. “It was a fifth form privilege to be allowed to go and do sports off site that weren’t just the normal hockey, tennis, athletics, netball. So I chose rowing,” she explains.

“I knew what it was because my older sister rowed there with her schools, and I’d gone down once in the summer holidays just for about an hour and we went on the tank, so I’d had a little insight into what to do, so when they said, ‘Who wants to get in this boat?,’ I was one of the ones jumping forward and saying, ‘Yup, me, I’ll go, I’ll go.’ And I took to it like a duck to water.”

One of the coaches at the Barn Elms centre, Bob Dowson, who was also the boatman at Civil Service Ladies RC, was extremely good at talent-spotting [I’ve come across at least three other internationals whom he encouraged to take the sport further – Ed.] He got it right with Sue.

“Within a couple of months, Bob said, ‘Why don’t you come down to Civil Service and row at the weekend?,’ so I got my friend to come with me and when we arrived there was a crew coming in off the river with England blades and I thought, ‘Wow look at that, that’s ENGLAND!’ And Bob said to me, ‘If you row for this club and get into the first boat, you too could row for England.’ So that was where I started, with this massive ambition to row for England which is quite funny because rowing for England isn’t that big a thing. You’re just the best club crew that’s around when the really good people are rowing for GB.”

Civil Service Ladies RC did their winter land training in the evenings at an underground gym at the Civil Service sports club, which Sue needed to catch two buses to get to, so it was quite a commitment. “We’d go there straight from school and arrive starvingly hungry, but we and were allowed to go into the canteen first where all the food was cheap. It was always steak and kidney pie with loads of baked beans and lots of mustard, but it was the business! After that do a run around and then our weights. I found out I was pretty good at weights already. I was quite strong – I just needed to be taught how to lift. And I absolutely loved it,” she says with typical enthusiasm.

The start of the first GB women’s squad

Women’s events were first included in the World Rowing Championships in 1974, and Penny Chuter, the Amateur Rowing Association’s first National Coach with responsibility for women’s rowing, started a new women’s national squad in the autumn of 1973.

“I’d just made it into the Civil Service first eight, and I was cock-a-hoop as a schoolgirl because I was thinking, ‘This is how you get to row for England,'” Sue explains. “But one day after our outing our coach, John Langfield, called a meeting, and he explained what was happening with the new squad and said that as Civil Service was one of the biggest clubs, we should support it, so he was disbanding our eight and asking us all to join the squad. So I duly headed off to try and join the squad and after some testing was sent back to my club to row with my junior friends.”

The following summer, Sue won the women’s junior coxed fours at the National Championships in 1974. The crew also contained another future international, Yvonne Earl. “We hadn’t won anything all year,” Sue remembers, “But the other regattas we’d been had only been over 500m or 800m, and although we’d never raced 1,000m until we go to the National Championships, we found we were really strong at keeping going when everyone else had given up!”

In the autumn of 1974 Sue put herself forward for squad trials again, and was selected to row in the GB eight at the World Championships in Nottingham in 1975, not long after she’d finished her A-levels.

“I continued rowing for my games option at Barn Elms while I was at school, and the school were very good to me in that once I was in the sixth form they’d allow me to go off site if I didn’t have any lessons and go sculling down at Barn Elms. Sometimes, I have to say, I went home for a snooze because I had GB training in the evening and what I needed most was sleep and not a little paddle on the river.”

Full accounts of the years when Sue represented GB can be found here: 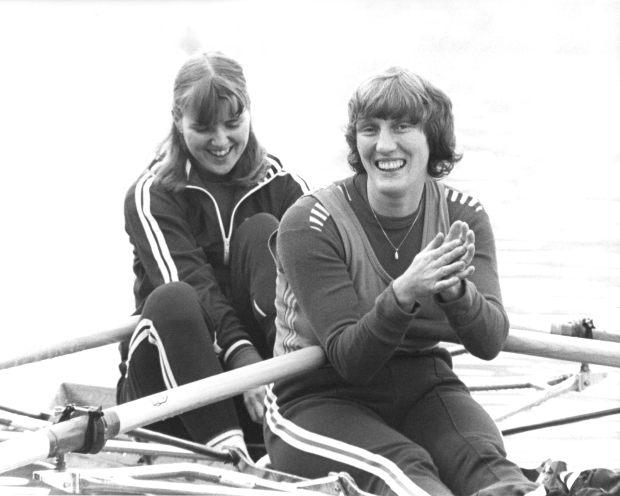 The squad was cut down to a small number of rowers very early in the 1976 season because it was Olympic year and so the standard was expected to be higher, and also because the game were in Montreal so it was very expensive for European countries to attend.

“I went back to my club and had the time of my life,” Sue says. “We had a really good four of other internationals – me, Rosie Clugston, and Chris Grimes from Civil Service, and then Jean Guppy chose to come and row with us because there wasn’t anyone else at of that standard at Stuart Ladies where she had been a member. We went round all the regattas and won them all, usually having a really close final against Derby RC in the four. Jean and I also raced in a pair a lot. We had an absolutely whale of a time and learned loads, so I don’t regret that for a minute actually. And we rowed for England in the four that year – so I finally got there!”

Sue won the women’s pennant at the Scullers’ Head in April and then competed at the early season international regattas in 1978 in the quad she’d raced in the previous year, but they weren’t fast enough to be selected for the World Championships which were in New Zealand and so finance played quite an important part in the decision. It was not a year when crews were sent ‘for experience’.

Instead, Sue was chosen for the Home Countries – again – this time as the single sculler. Her friend and quad crewmate Rosie Clugston went as her coach and her younger sister Barbara coxed the women’s four. 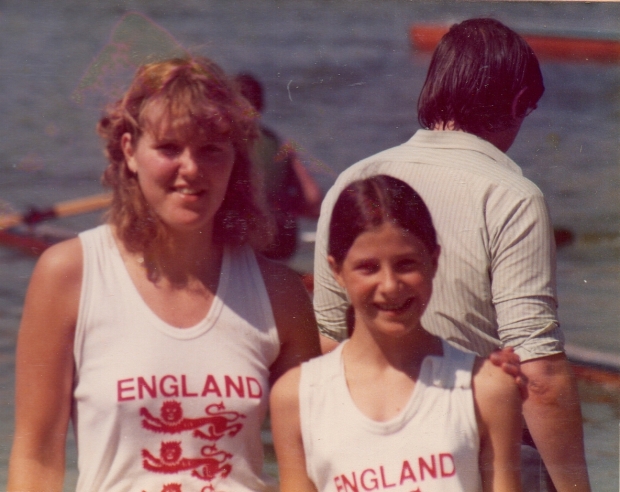 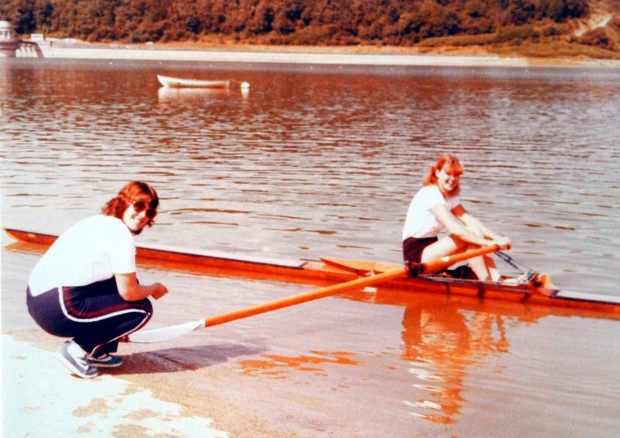 The end (except there’s more)

Sue made a positive decision to stop rowing internationally after coming sixth at the World Championships in 1981 in the double with Astrid Ayling.

After she left school, Sue had spent three years working before she went to college. She’d also married fellow international Ian McNuff after the Moscow Olympics (the September 1980 issue of Rowing magazine featured a photo of hem coming out of the church under an arch of blades). “I’d come to the point where I’d finished my degree,” Sue says, “Ian was winning medals internationally and I wasn’t, and I just thought one of us needs to go to work so I decided it needed to be me. Initially I might have just said I was having a year off, but I think I knew that I’d never go back.”

“I’d also had problems not being able to breathe properly during winter circuit training the previous year. It was a really hard circuit, and we also had to roll up a carpet in the club room at Kingston before we trained so it was always really dusty, and that probably didn’t help either. But I’d get to the point where I really couldn’t breathe, and I’d have to go out in the cold air and try and get my breath back, and that was incredibly distressing. It never ever happened on the water or anywhere else but filled me with dread, and I didn’t want to have to go through that any more.”

While she was still in the GB squad Sue, like many other international rowers – both male and female – did some skiff racing towards the end of several summers. She won the Mixed Championships with Graham Mulcahy and the Ladies Championship with 1977 international Yvonne Earl in 1978, representing Skiff Club.

Once she stopped training seriously, though, Sue avoided both rowing and skiffing for some years as she didn’t want to find herself alongside people she used to be as fast as now that she was less fit.

After many years of running, and having three children, Sue got into dragon boating, representing the GB team on several occasions. Her final appearance at the Dragon Boat World Championships was in Nottingham in 1999 which she points out, was rather tidy as that was also the venue for her first World Championships appearance when she rowed in the GB eight in 1975.

Rosie then got her involved with a veteran women’s group she’d started which was known as UK Gold, made up of people whom she’d coached in different places over the years, and Sue enjoyed a string of wins with them at domestic, European and World Masters regattas, driving up the standard of racing for this age group in the UK at that phase in its development. 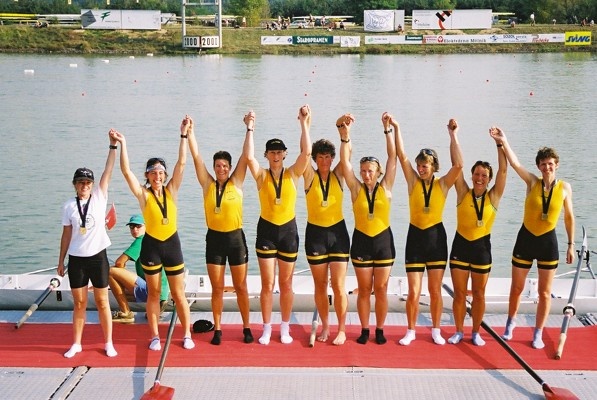 Sue is third from the right celebrating a win at the World Masters Regatta in Racice (Prague) in 2002. The author is far left, and Sue’s 1980 Olympic team mate Liz McVeigh is in the middle.

Sue was then appointed as one of the Amateur Rowing Association (now British Rowing)’s first ‘World Class Start’ coaches, based at Molesey BC. One of her first ‘discoveries’ was Moe Sbihi who went on to win multiple World Championship and Olympic medals.

She has been the Entries Secretary for Henley Women’s Regatta since 2011.