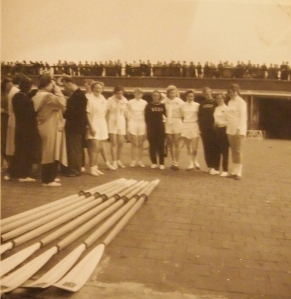 British and Russian competitors at the Bosbaan in 1954.

It’s worth noting that for both the men’s and women’s Championships, ‘European’ referred to the location in which they took place rather than to the nationality of the competitors: crews and scullers from any country were welcome to enter although there weren’t actually any non-European entries in the women’s event until 1967.

In the 1950s there were no World Rowing Championships – for anybody. The GB men raced on a four-year cycle that went:

In years when both women and men were racing at European Championships, these regattas were always held in the same country apart from two occasions.

The first World Rowing Championships were held in 1962 (men only) which increased the entry from non-European countries. Initially these were only held quadrennially like the Olympics, taking place in the same year as the British Empire Games (which certainly wasn’t a problem that first year as the Empire Games were in Jamaica and, not surprisingly, rowing was “omitted from the programme” as the Almanack put it). They were held in different locations from the Women’s European Championships in order that as many countries as possible develop the skills and knowledge needed to run events of this stature.

This pattern continued until 1974 when annual World Championships, for both men and women in all non-Olympic years, replaced the European Championships. Women’s events were included in the Olympic regatta from 1976. From 1984, Worlds were also organised in Olympic years for non-Olympic events.

European Rowing Championships were re-introduced by FISA in 2007, but it should be noted that these were conceptually different from the ones that ran until 1973: the new ones are only for European countries and not all nations send their top boats to them.