The photo at the top of this page shows Felicity (right) at the World Championships in Tasmania in 1990 with Helen Mangan. (Photo: Rose Mayglothling’s personal collection.)

Felicity started rowing when she was 27 on the advice of her surgeon after she’d had both knees operated on to remedy injuries sustained by skiing, and playing basketball and various playing field sports – perhaps an occupational hazard for a PE teacher living in Swizterland. Although this was an unusually late start for someone who made it to international level, she already knew how to train, and also benefited from her knowledge of sports science.

She learned to row at the Société Nautique de Genève in Geneva, where she had grown up and where she returned after going to college in the UK, qualifying for Swiss citizenship in addition to her British nationality when she was 18.

By 1986 she was taking part in early season international regattas, and she was then selected to row in the lightweight double scull for the Swiss team at the World Championships in 1988, with Daniela Isaak.

“In 1989 I single sculled and I was told that if I came eighth overall at Lucerne, that’s second in the small final, I’d be selected for the World Championships. And I came eighth but they didn’t take me, they didn’t take anybody,” Felicity remembers. “The World Championships were only in Bled that year, which is why it was so upsetting. I would have understood if it had cost a lot of money, because I obviously wasn’t a medal contender, but it didn’t because it was only in Europe.”

The following year. Felicity decided to trial instead for the British team, and did particularly well at the January 1990 trials at Thorpe Park where she came fourth overall (across openweights and lightweights), and finished second out of the lightweights.

Even though she was happy to travel to Britain for the various formal trials, the fact that she lived and worked in Geneva did present the squad management with a practical dilemma in terms of training. As a result she was initially encouraged to double with another women who lived on the continent, but this didn’t come to anything as the other sculler was at an earlier stage in her development. Then there was talk of putting her together with Rachel Hirst who was one of the tallest members of the lightweight squad and so the combination made a lot of sense from a weight point of view as Felicity was a “light lightweight” at only 55kg, but Rachel stayed in the coxless four in which she’d won a silver medal at the World Championships the previous year. In the end, Felicity was teamed up with Helen Mangan (who, interestingly, had also only taken up rowing in her late 20s), winning at Ghent regatta in May, just a week after first getting in a boat together at trials. After beating two other British lightweight doubles at Amsterdam regatta in September they were finally selected to race for GB at the 1990 World Championships in Tasmania.

Although Helen travelled to Geneva to train on one occasion, they did most of their preparation in Britain; fortunately Felicity’s employer, the International School of Geneva, was very supportive.

A full report of the 1990 World Championships can be read here.

Felicity (right) and Helen Mangan at the World Championships on Lake Barrington in Tasmania in 1990. (Photo: Felicity Medinnis-Leach’s personal collection.).

Much as she’d enjoyed the British team’s setup, Felicity realised that she couldn’t really continue rowing in one country and working in another (by this time she was married, so moving to the UK wasn’t an option) after the 1990 World Championships, although she and Helen did win the silver medals for lightweight doubles at both Ghent and Duisburg regattas and came tenth at Lucerne (where two other GB crews were fifth and sixth) in 1991.

“The Swiss then asked me if I would join a project to do a coxless four, so I joined in with that and had some interesting experiences once again with the Swiss,” she remembers. “I did some trials for it in a pair with a girl from the Italian-speaking part of Switzerland, we were selected to be in the four. We got a nice Empacher boat to row in, and it was all starting come together nicely. Then we went to Essen to race, and we’d been told that a decision would be made based on our performance there whether to carry on with the crew or not. Before we went we were all quite positive about it but then we got there and our riggers weren’t on the trailer so we had to borrow a boat but it was too big, and we had to sit in a different order because stroke was on the other side. Not surprisingly it didn’t work, and that was the end of that.” 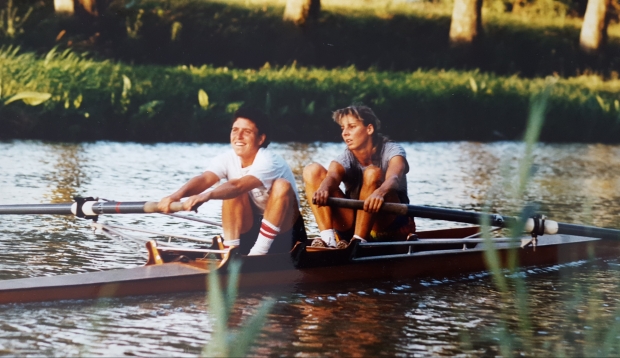 Felicity (left) training with her pairs partner from the Italian-speaking part of Switzerland, Denise Gubbi, on the Canal du Midi in France in 1992. (Photo: Felicity Medinnis-Leach’s personal collection.)

After this Felicity continued racing domestically at senior level until 2003, though she had also started going to the World Masters Championships from 1994 onwards. She was President of SNG’s rowing section for ten years, and was President of the organising committee for the club’s epic annual 160km Tour du Léman à l’Aviron race in 2002 and 2003 too, having competed in it twice herself.

In 2004 Felicity moved to Hamburg with her husband because of his job, and started coaching at RG Hamburg. “I coached there for about 10 years, she explains, “Working with a whole mix of people. I did a lot with the crews that were taking part in the Ruder-Bundesliga, a series of club-level sprint races in eights for club, but I also coached masters, and the odd individual who was keen to row more seriously – for a while I helped was a girl who was part of the Czech rowing team –  but basically anyone who was a member of the club! I was there pretty much every day but I loved it!”

The amount of time and energy she spent coaching meant that she stopped competing herself after the 2007 World Masters regatta, but she started training again in 2015 when she and her husband moved back to Switzerland, and is now once more to be seen at regattas both sculling and coxing.

Felicity winning the third of her ten Swiss Championship titles. This one was for lightweight singles in 1987: the last was in 2003. (Photo: Felicity Medinnis-Leach’s personal collection.)