The photo of Kate at the top of this page was taken at the opening ceremony for the LA Olympic Games in 1984 and is from her personal collection.

Kate started rowing when she was 14 at Bradford ARC for the classic reason that three other women needed a fourth person to make up a crew. “Like a lot of kids who end up in rowing, I was never much good at netball or hockey at school, but I wanted something sporty to do. I’d always been to regattas and with my dad, who had learned to row at school and I think was President of the club by then, and I thought it might be quite good fun, so I had a go!,” she explains.

Her crewmates were adults who had rowed at university and were no longer eligible to race ‘novice’. “So in my first competitive season we had to do Senior C races and it took us a long time before I won my first race,” she remembers. “We got to loads of finals, I remember that, and we got very frustrated, especially as we had to row in a big, old, wooden boat that was called Phoenix, because it was bought after Bradford RC had had a a lot of boats destroyed in a fire about 30 years earlier. And of course there was a men’s crew that was using it as well, so we were fighting about who could go out in it all the time, but we had a bit of fun and finally I won my novices after a lot of racing that season, and I got hooked.”

After this the other three gradually drifted away, so Kate’s dad bought her a scull (which she still had until very recently) and coached her, mostly in the single, although she also did some double sculling with another girl who joined the club. Whichever boat she was in, though, “I just really enjoyed it all,” she says. 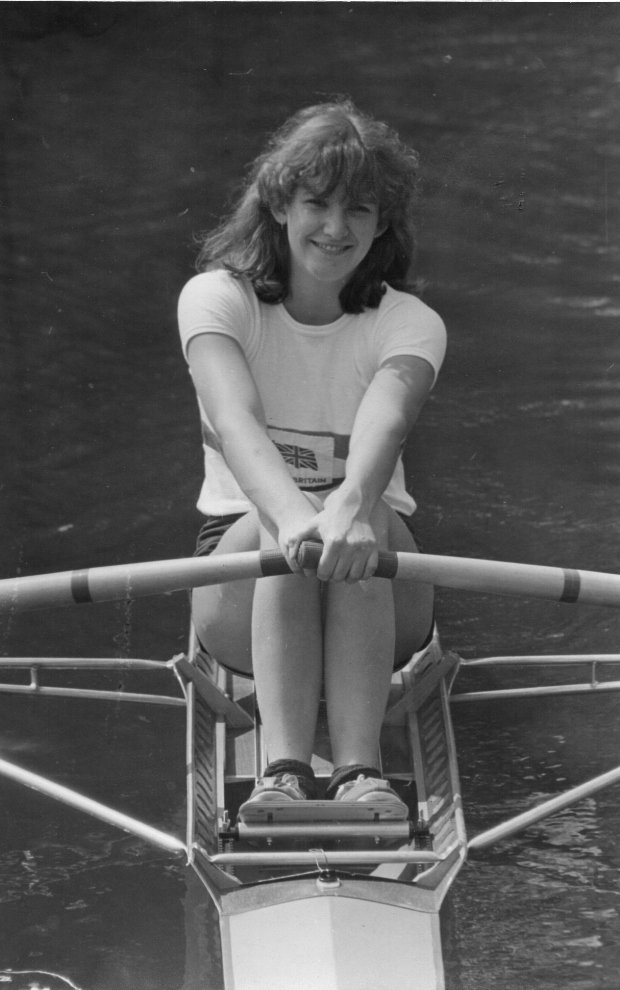 In 1980 she was selected to row in the first GB junior women’s eight that competed at what were then known as the FISA Championships for Juniors. This was only the third year that these included events for women. “I seem to remember coming down south an awful lot during that year and I think we did quite a lot of work on the Weybridge stretch of the Thames because that’s where most of the rest of the juniors were based,” she says.

The crew were last at the 1980 Junior Championships but, Kate explains, “Luckily there was a good proportion of us who could came back for the second year and I think that was probably the selectors’ thinking – we got the experience first time round, and then we did a bit better in 1981 with a crew that was far more competitive and close to winning a medal.” They reached the final this time, finishing in fifth place just 1.66 seconds off the bronze medal winners. 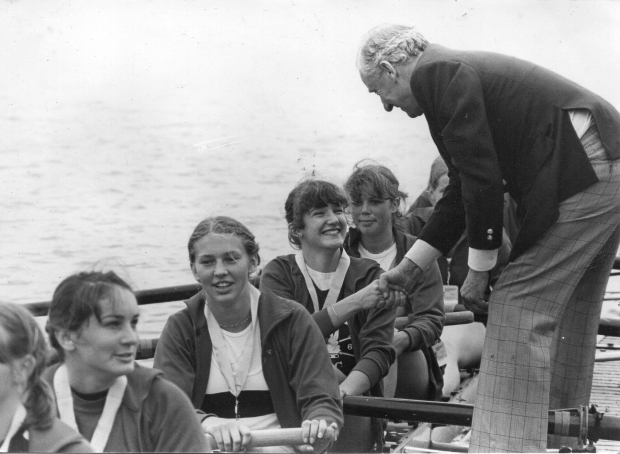 Kate shakes hands after being presented with a medal in the GB junior eight at the National Championships which won junior and came second in the senior event. (Photo: Kate Holroyd’s personal collection.)

After she left school, Kate went to University College, London to study French with German. Her choice of university, she admits, was “absolutely, totally” based on wanting to be in London to row with the national squad. Her decision paid off as she got straight into the senior team in her first year. She rowed in the GB eight at the 1982, 1983 and 1986 World Championships, and at the Olympic Games in 1984; and in the England coxed four which won the bronze, and the eight at the Commonwealth Games in 1986.

Full details of the years in which Kate represented GB can be found here:

Although they were a minority, several athletes in the 1980s – Kate included – rowed more or less full time Olympic years. In her case, she took time out from her course for the 1983-84 season.  “I should actually have been in France that year, so I got the university to agree to me taking a year off, but stayed in London and did a lot of cleaning jobs to earn some cash. It fitted round my rowing, and it was quite good fun actually, getting to see some nice houses in Barnes!” That year she and her team mate Katie Ball, whose birthdays are three days apart, threw a memorable joint 21st party at Lea RC where Katie had long been a member, and Kate also rowed for a time (and lived in the flat over the cafe next door).

After the Los Angeles Olympics, she did, however, do her ‘immersion’ year in France, working as a teaching assistant in the small town of Montluçon. “It had a tiny rowing club, so I took my scull, and it was actually a great place for my French because it’s totally off the tourist trail and no one spoke English there!” She nipped back to the UK to win the Women’s Head in March 1985 in a relatively scratch crew of ‘GB scullers’, and also won the double sculls with Jean Genchi at the National Championships – dead-heating with Lin Clark and Beryl Crockford, who went on to win the lightweight doubles at the World Championships that year – just a few weeks after she’d returned for good. Kate’s dad had become an umpire by this stage and was one of the finish judges for the race, although other umpires were involved in checking that the two crews, which finished 45 seconds clear of the bronze medalists, and really couldn’t be separated.

After rowing for GB again in 1986 and completing her finals, Kate started work with Barclays bank on their graduate branch trainee scheme. She moved to Teddington, and joined Kingston RC where she sculled a lot but rapidly realised that her job was incompatible with squad rowing. “Banking then was very much the old style of putting in the hours. You were expected to be in there from 7.30am to 7.30pm, so part way through that ’87 year I thought I’ve got to make a choice here, I can’t do both,” she explains, adding, “I think I also felt that there was a long way to go before the GB [openweight] women could potentially get a medal, which wasn’t helped by the constant chopping and changing of coaches.”

Looking back on her time as an international rower, Kate continues, “I feel so privileged to have gone to the Olympics in 1984, which was such a highlight for me. It really was a great experience! The final was brilliantly exciting, and the whole thing was incredible from the athletes’ point of view. It was so well organised. As just a young, British oarswoman you were treated like a famous sports star – every time you went in and out of the Olympic village there would be people coming up trying to get your autograph; they’d have no idea who you were, but they wanted your autograph simply because you were part of the British team. Although I would have loved to have done better in my rowing career, I just feel really privileged to have had that opportunity.”

Kate continued to enjoy sculling at Kingston RC after her GB involvement had ended, and her schedule sometimes permitted her to join crews for a bit, with considerable success. Amongst these was winning open quads at the third Henley Women’s Regatta in 1990 with fellow internationals and KRC members Flo Johnston, Jackie Prout and Aggie Barnett, and in 1996 with KRC under 23s/juniors Sarah Birch, Mary Stevens and Nicola Ledger. In 1994 and 1995 she stroked the KRC senior women’s squad eight at the National Championships and then the Women’s Eights Head of the River, teaching the author, who was coxing, an awful lot in the process, and doing so in an effective but all-too-rare calm and positive way, that is typical of Kate the person.

Today she coaches at Henley RC where two of her daughters row. 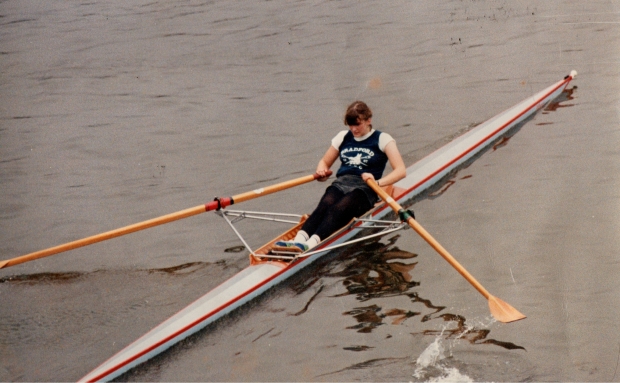