Nicola grew up aware that the sport of rowing existed because her grandfather had rowed in the 1920s for Middlesborough Amateur RC (which later merged with Tees RC). She took it up herself when she went to Clare College, Cambridge to study medicine in 1972 as part of its first intake of women. “I thought I ought to because I’d spent my teenage life doing no exercise at all, and I also thought it was sociable,” she says. “I was totally unfit, and I couldn’t even finish the three minute warm-up run without having to stop, but it turned out I did have an aptitude for pulling on an oar.”

When a women’s division was added to to May bumps in 1974, Nicola was in the Clare crew which started and finished head. Twelve crews from six colleges participated, rowing in fours, owing to the small number of female students at the time (women’s Mays only moved to eights in 1989).

Nicola is at three in the Clare four being poled off at the head of the women’s division in Mays 1974. (Photo: Nicola Burbidge’s personal collection.)

Cambridge lead (they went on to win by half a length) during the 1974 women’s Boat Race in Oxford. Nicola is at five. (Photo: Nicola Burbidge’s personal collection.)

When she moved to London in the summer of 1975 to start her clinical studies at Guy’s Hospital, she joined Civil Service Ladies RC which she noticed was one of the top women’s clubs at the time when competing at the National Championships with Cambridge. This next stage of her rowing career owes a lot to the help she received from CSLRC member Maggie Lambourn (now Phillips) who had rowed for GB at the World Championships for the previous two years. “Maggie picked me up and nurtured me,” she remembers. “She was really encouraging, and we did quite a lot of pairing together and as she had a car she would also would run me everywhere, trips up to Nottingham and things like that. We had a great summer in 1976, winning loads, including bronze medals at the Nationals in the pair and the coxed four.” 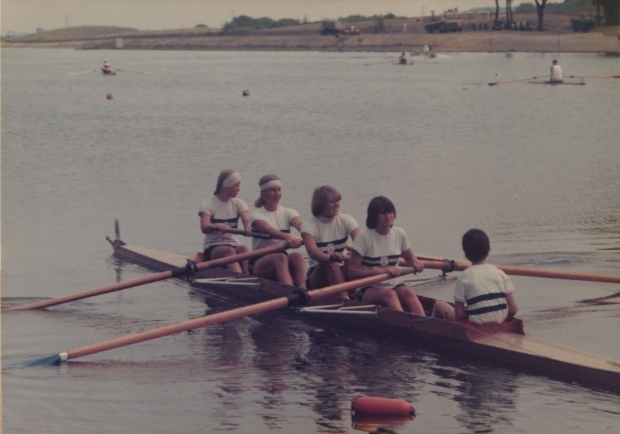 Having attended a couple of GB trials almost as soon as she joined Civil Service, but got no further when the squad was cut down very early that year, Nicola joined the GB squad in the autumn of 1976, and was selected to row in the coxed four (with Maggie) at the World Championships in 1977. She then rowed in the eight in 1979 at the World Championships, in 1980 at the Moscow Olympic Games (where there were no fewer than three Clare alumna in the GB women’s rowing team, the others being Penny Sweet and Bridget Buckley) and in 1983 at the World Championships.

Full accounts of Nicola’s years rowing for GB can be found here:

The 1978 season can probably best be described as ‘challenging’ for Nicola. Not only did she sit her medical finals at the end of it, but she was also faced with two serious medical conditions herself. In both cases her professional knowledge almost certainly led to quicker recovery times than would have happened if she hadn’t been able to self-diagnose. In the autumn of 1977 she did an elective in Kenya. A few weeks after she returned, she remembers, “I was weight training at the gym with the squad and I came over all hot and funny and felt really peculiar. Then it happened again two days later which is the cycle you get from malaria. I also realised I could feel my spleen, which is another malaria symptom, so I went to the tropical diseases unit who did a blood test and told me I was fine, but I wasn’t convinced because of being able to feel my spleen, and also because I was still taking anti-malarial drugs which suppress the parasites in your blood. So I persuaded the doctor that the lab should maybe take a closer look, and then they found it. Fortunately it was only the type which makes you feel indolent, not the one that kills you. They made me stay in hospital for a night or so, but I kept doing squat jumps beside my bed because I was twitchy about losing training time and then they let me out and I got better quite quickly.”

Having got over all of that, she rowed in the GB four at thee early-season international regattas, but then contracted appendicitis. Although she got back quite quickly, the crew was eventually not selected to be sent to the World Championships in New Zealand that summer. The saga of the 1978 World Championship season, which also saw the GB four being strongly challenged by a crew of former internationals, is told in detail here.

Nicola at an assessment weekend in Nottingham in 1978. (Photo: Nicola Burbidge’s personal collection)

Managing a medical and an international rowing career

Having passed her medical finals in the summer of 1978 Nicola should then have started on a series of house officer medical jobs. Knowing that these would involve being on call and doing shifts, she realised that they would be completely incompatible with rowing in the squad in the run up to the 1980 Olympics, and so seriously considered stopping her medical training for two years in order to row. She mentioned this to one of her tutors, who said, “Don’t do that!,” and arranged for her to do her house jobs over two years rather than one, with no nights or weekends, and paid by a Trustees’ fund to whom Nicola is extremely grateful. “It did mean that I never really learned any emergency medicine because you actually get your main experience of it on nights and at weekends when you’re on the front line with it all,” she says, and reflects that her decision did limit her later medical career options and admits that, although she’s never regretted becoming a GP, she might well have gone into hospital medicine had it not been for rowing.

After the 1980 Moscow Olympics, “I couldn’t make up my mind whether I wanted to carry on training or get on with medicine and so I dallied a bit,” she says, although she did then start doing “proper” medical jobs. She carried on training a bit in 1981 and 1982, and won a silver medal behind the GB pair at the National Championships in 1982 in a pair with Kate McNicol, the medical student daughter of a hospital consultant for whom Nicola had been working, who went on to row for GB. Nicola and Kate also won a silver in the eight in a scratch composite of past, present and future internationals, and were selected as the England pair for the Home International Regatta, which they won. 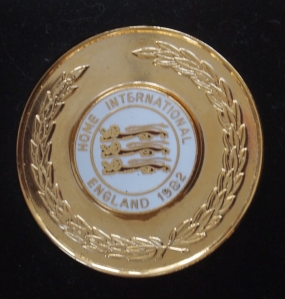 Nicola then came back to the GB squad in 1983. “I think I got let in on the basis of what I’d done in the past,” she says wryly. “I wasn’t doing sufficient training to have actually earned my place in my view.” This experience proved to be what she needed to make up her mind to stop for good. “I regret messing around for those two to three years years when I couldn’t decide whether I wanted to train and go for the 1984 Olympics. In the end, I realised I didn’t have the time to do it properly – and it would have involved even more properly than doing the 1980 Olympics – and I didn’t actually want to do that, and maybe I wasn’t actually so good anyway! So I should have just stopped after 1980 and not messed around which did neither myself nor the rowing world any good.”

Despite her irritation with herself at how her international rowing career ended, Nicola is rightly proud of having competed at the Olympics, and particularly of having been selected to row in the seven seat of the eight because, as she puts it, she had no natural co-ordination or sense of rhythm, and so had to work hard to develop the particular skills needed to row there

Nicola is the Doctor for the Women’s Eights Head of the River Race, a role which she’s held for many years. She was also medical officer for the GB Under-23 team at the Match des Seniors in 1985, and for other GB rowing teams since then.

She has recently acquired an ergo which she uses in a shed at the bottom of her garden and admits that rowing might well play more of a role in her life when she retires.

Nicola at bow, racing the Pairs Head in 1978 with Gill Webb. Note that Gill is steering from stroke although this is usually done at bow. “I couldn’t ever steer,” Nicola says. (Photo: Nicola Burbidge’s personal collection.)