The photo at the top of this page shows Sue training on the Tideway shortly before the 1995 World Rowing Championships and is copyright © John Shore.

Sue first tried rowing when she was 22 because her partner at the time was a rower. She joined her local club, Mortlake Anglian and Alpha, in 1985 and did a couple of seasons, mostly in a coxed fours in an on and off way as she was also doing evening classes, which the club accommodated as it didn’t have many women members at the time and she was at least already very fit and sporty. It was all good fun, and she remembers being very excited when she was eventually invited to row in the first four.

In due course her crew moved into a coxless four. “I was at bow so I had to steer and from that point on my rowing technique went downhill because I was so worried about trashing this boat that all my concentration went into the steering,” she explains. “It got to the point where I knew I was going to be shouted at every outing so after a few months of that I said, ‘That’s it, I’m stopping. I’ll do the last two races of the season and then I’m going to go single sculling. And I didn’t really ever look back from that point!”

After buying her first boat, a Janousek, which she collected on Christmas Eve in 1988, Sue exploded onto the racing scene, picking up a string of wins at heads and regattas throughout 1989 and moving up the statuses.

As a result of her performance at Henley Women’s, she got a phone call from the Chief Coach of GB Women’s Rowing, asking if she’d like to trial for the lightweight double that would be going to the World Championships in Tasmania that autumn. “My coach, Tony James, said, ‘Don’t do it, stick to your guns and stay in the single because the double won’t get anywhere,’ so I said, ‘No thank you very much.'”

The following year, 1991, she went through the GB trials process from the start of the season and was selected as the lightweight single sculler for the World Championships in Vienna where she came seventh, an excellent result for a newcomer to international racing.

That year she won both lightweight and openweight single sculls at the National Championships, a feat which she repeated in 1994 and has only been achieved by one other sculler (Phoebe White in 1992).

Being slight and not particularly tall, Sue never had any trouble weighing in. “Sometimes I used to get on the scales in full kit and with my trainers and a jacket on because I didn’t want my competitors to see I was 4kg under weight in case they thought they had a psychological advantage,” she remembers.

Following her promising start GB sculling, Sue wasn’t selected for the next two years, missing out to Sue Key, which she found frustrating because she feels they never directly raced each other when both were healthy and down to weight.

In 1994, when there was also a Commonwealth Regatta, she says, “I made a conscious decision not to do trials. I’d just got annoyed with it all and also the squad management had said that I couldn’t do both the Commonwealths and the World Championships, and I thought that I’d rather do the Commonwealths because it’s a bit different and it was in Canada which I wanted to visit.”

She was duly selected as the England lightweight sculler, and loved the whole experience even though, by her own admission, she paced her final all wrong. “I went off way too hard in the final,” she explains. “And at 500m I think I was two lengths up on Michelle Darvill who’s Canadian and had won the World Championships the year before. So I was thinking. ‘Oh dear, I shouldn’t be this far up!’ By the time I got to half way it became a case of survival and I was just trying to hang on and hang on. She rowed me down and then I had to struggle to stop Claire McDougall-Smith from Scotland overtaking me because she was gaining on me every stroke. I remember feeling quite dizzy and sick on the finish just from having to do those desperate last few strokes trying to stay ahead of her. But it was a good regatta.”

Sue was selected as the GB lightweight sculler again in 1995 and 1996. By then she had a Carl Douglas single scull, and the boatbuilder used her as the ‘poster girl’ on his adverts.

Her fourth place in 1995 was her best World Championships result but she was badly washed down in the final by the TV catamaran in the adjacent lane (and there was some controversy about whether she should actually have been in another lane too). Once it had eventually backed off, after she’d turned round and shouted a fruitily-worded request at the driver, she produced the fastest final 500m of any of the scullers in the race but it wasn’t enough to make up the deficit. Reflecting on that day now, Sue says, “I think I would have been capable of getting bronze. Tony, my coach, always says he thinks I would have got the silver; I’m not sure about that, but I do think I would have got bronze.”

Full accounts of Sue’s years representing GB and England can be read here:

After 1996, Sue decided to retire from international competition. “It’s difficult to keep doing the same thing after so many years, and by then I was 33 and all my contemporaries had bought flats or houses while I’d just been spending thousands each year on rowing, travelling to international regattas, paying for boat transport and hotels, and only working part time so that I could do enough training. I needed to sort myself out and move on.”

She did, however, keep rowing domestically, not least because she had continued to win the lightweight single sculls at Henley Women’s Regatta every year since her first success there in 1990. In 1995 the regatta had presented her with a special medal to commemorate her sixth win, but she realised that she had a chance of getting to 10, and made that a target. 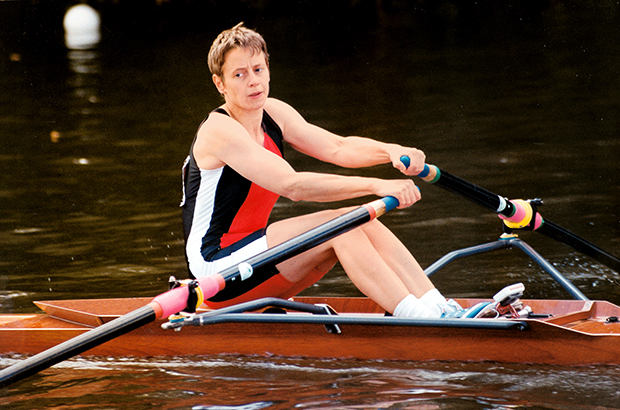 After winning her eighth and ninth titles in 1997 and 1998, in 1999 she remembers adopting the quite bold strategy of not racing at Metropolitan Regatta, which most people do as preparation a few weeks before Henley Women’s. “I wasn’t at all worried that this would be my first race of the year and that I didn’t know how fast I was relative to others. In fact, I decided this would give me a psychological advantage as, by this time, I had such a reputation at Henley Women’s that I hoped anyone who lined up against me would be worried about just how fast I might be. I knew my training had gone fantastically well and I certainly was not about to let anyone deny me my tenth title! My motivation to win was huge.”

Her psychology paid off and she won her historic tenth successive title. “I was always going to retire after that,” she says, “And I’d even written ‘This is my last ever HWR’ on the entry form.” However, she did do one more year, this time in a double with clubmate Liz Marsh. “I started doubling with Liz because she was quite inexperienced but also quite good. We got a really good rhythm in the double together, so I agreed to race there with her in lightweight doubles in 2000 but I didn’t actually ever expect we would win. Except we did!” The medals were being presented that year by Steve Redgrave who had famously said, immediately after winning the Olympic Games in 1996, that if anyone ever saw him in a boat again they had his permission to shoot him, but then changed his mind and carried on rowing through to the 2000 Games. “He said, ‘Oh, I thought you said last year you were going to retire?,'” Sue recalls, “So I replied, ‘Yes, it’s a bit like someone else saying they’re going to retire after the Atlanta Olympics!'”

The video below shows Sue leading Tegwen Rooks of Kingston RC in the final in 1999.

Sue’s fastest time at Henley Women’s was 5.41, which she set in 1992. After standing for 25 years, her record was eventually broken by Maddie Arlett in 2017. “I was thrilled when she did that as I’d been waiting a long time!,” Sue says, adding, “But I am very proud to have held that record for so long.” 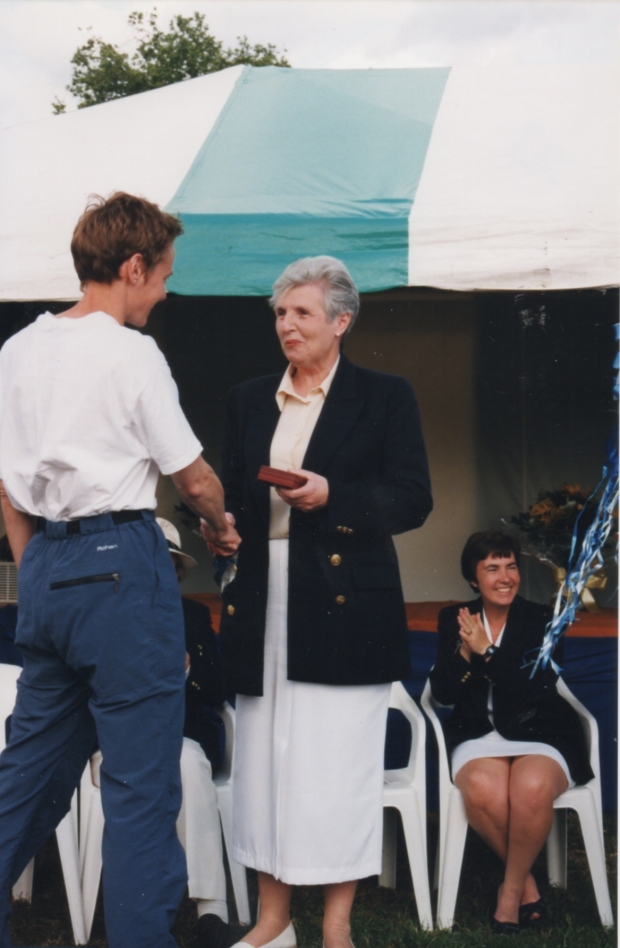 Sue being presented with one of her HWR medals by Di Ellis with long-time Regatta Chairman Diane Graham applauding. (Phot © John Shore.)

Sue also won the overall women’s division of the Scullers’ Head twice, in 1999 and 2001. Ironically, both occasions were after she’d stopped racing internationally and wasn’t training quite so intensively.  Nevertheless, she says, “It took me years to get a place because it was always oversubscribed when I was at my peak and people who had done it the year before got the priority places so I could never get in. And then when I eventually did get in, Anne Marden, the American Olympic medallist who lived in London was doing it. She won the women’s pennant for several years, and I didn’t stand a chance, but she then stopped racing and I actually felt I was getting stronger at the age of 36.”

One coach, one club

Sue was coached throughout her rowing career by Tony James, a volunteer club coach at Mortlake Anglian and Alpha, the only club she’s ever belonged to. He’d first coached her when she was rowing in the coxed four early on in her career, and had been the one who’d finished up shouting at her as her rowing went downhill once she was steering the coxless four. After she’d learned to scull and was starting to have ambitions, she remembers, “Tony offered to coach me so I said, ‘I’d be really happy with that but don’t ever shout at me because it won’t work.’ And he didn’t! He was my only true coach, really, and he was extremely good technically. I’m privileged and very grateful to have had such a wonderful coach.”

Sue was known for having quite an unusual technique which involved opening her body angle up further at the finish than the textbooks recommend. “I guess I just developed that myself, partly because I’m a really light lightweight so I don’t have the upper body strength and I have to use technique to make up for that,” she says, adding, “Tony didn’t ever say I had to lie back but he didn’t discourage me either. He did always emphasise that I had to use my body weight and if you look at a lot of scullers who don’t, they’re not actually getting as much length through the water.”