In what was fast becoming a pattern of ‘one on, two off’ there were no GB entries at the Women’s European Championships in either 1958 (at Poznan in Poland) or 1959 (at Macon in France).

There were 12 races at Poznan, one up on the previous year, and a mighty 16 at Macon.

Whilst our lack of entries was entirely justifiable on the grounds that the Women’s Amateur Rowing Association was still paying off debts incurred in sending crews to the 1957 Championships and that “no crew or sculler of high enough standard appeared to give them any strong claim to be sent to represent this country”, it’s rather horrifying that the WARA’s report in the British Rowing Almanack 1959 also lists “an expensive and rather tiring journey was involved” as a reason for not going to Poznan. Perish the thought that anyone should get tired representing GB.

However, Marrian Yates, who competed in the eight at the 1957 Championships, went to watch and wrote about her experiences in the April 1959 issue of The Oarswoman.

She traveled to the Championships with the Dutch contingent, whom she’d got to know when she’d raced in the Netherlands with ULWBC. The Dutch got her an access badge to the regatta course, and she camped between the changing rooms and the boat racks with some Dutch girls who were supporting their friends from Leiden University in the Dutch quad. 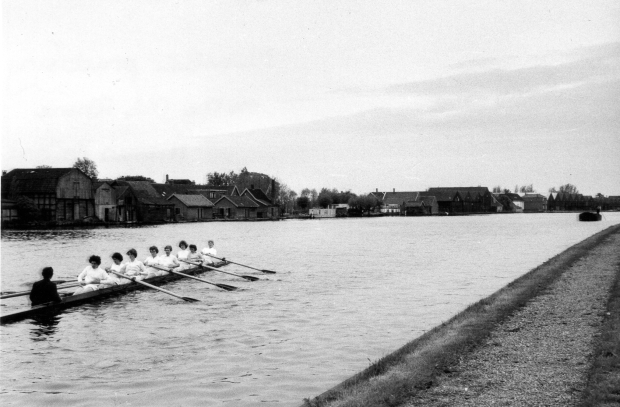 University of London WBC practising at Alphen on the Rhine before taking part in the Hollandia Regatta in May. The crew contains several existing and future GB internationals: Joan Hiller is coxing, Sheila Beningfield is stroking, Marrian Yates is at 7, Ann Sayer at 6 and Vivien Roberts at 4. (Photo: Ann Sayer’s personal collection.)

“I found it hard to sit and watch everyone else practising,” she wrote, “When we might have taken part as well – especially as, with practice and training, I am convinced we had a crew last summer which could have obtained at least fifth or sixth place. Everyone – officials, other crews, team managers – was genuinely sorry we had not produced a crew, and asked the inevitable question: ‘Why?’ Although reasons are so painfully obvious to ourselves, to those countries where sport is nationalised, or money no object, it is well nigh impossible to explain our own system and lack of funds; they simply cannot comprehend.”

She added, “Should we be unable to send crews at any time to the Championships, I feel strongly that someone, in either an official or unofficial capacity, ought to be present. At least it gives to other countries, especially the organising country, the assurance that we still have a keen interest in the Championships. Our frequent absence makes this reassurance more vital, especially as I could occasionally sense a feeling that ‘we were letting them down’.”

The WARA report in the Almanack goes on to say, “In view of our financial position the Women’s ARA has been mainly concerned in the past twelve months to build up resources, having in view the prospect opening out before us of Championships at Macon in 1959” but whether the piggy bank was restocked by then isn’t recorded because by then the WARA had to admit once again that “greatly to our regret no crews were of sufficiently high standard to be invited to represent this country in the 1959 European Championships at Macon.” However, according to the October 1959 issue of The Oarswoman, “a small party of members of the Women’s ARA were able to go as observers.”