The 17th Women’s European Rowing Championships took place at Lake Tata, about 80km from Budapest in Hungary, from 21-23 August 1970.

There were 52 entries from 17 countries (including the USA) – a new record for both. There were no men’s European Championships that year as they were competing instead at the World Championships at St Catherine’s in Canada.

Racing was over 1,000m, the distance set by FISA when it first introduced international women’s rowing in 1951.

The new decade saw a new and welcome initiative from the Women’s Amateur Rowing Council in the form of a training weekend; “An occasion where selectors and trainers could watch people in action in various boats and give them some material help,” the latter being the really radical bit – governing body involvement in the National team had previously been limited to judgement and (limited) equipment support rather than nurture. The weekend was held at Reading, and the reasonably new National Coach Bob Janousek attended for some of it and “gave a great deal of help” according to the WARC report in the Almanack.

At some point, possibly at this weekend, Christine Peer and Elaine Steckler (from the 1966 eight) did a trial in doubles against Christine Davies and Margaret Gladden, which the latter won narrowly.

Following on from this, the Almanack records that, “A number of scullers [Margaret Gladden, Christine Davies and Christine Peer] went to the two Amsterdam regattas in June and July and a Civil Service eight went to the June one. All those taking part gained a great deal of experience of international racing.” Impressively, Margaret finished just a length/four seconds behind the 1969 European sculling champion Genovaite Sidagite of Russia at the July Amsterdam regatta.

The Almanack continues, “After the June regatta Christine Peer and Christine Davies decided to team up in the double sculls and they were nominated for the European Championships … as also was Margaret Gladden in the single sculls. This was the extent of the team and as the distance was great and the expense high perhaps this was just as well.” 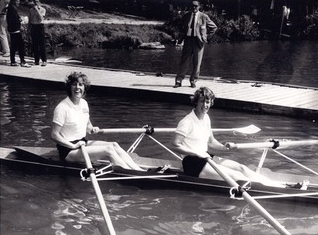 The Selectors were Frances Bigg, Hazel Freestone, Julie Johnson, Eleanor Lester, Barbara Philipson, Irene Sanders and Marrian Yates – the same group as the previous year with the addition of Irene.

Margaret McKendrick was Team Manager and the group were accompanied by Christine Peer’s husband, John, who was the son of Bill Peer, a Cygnet RC stalwart and coach of the 1966 GB women’s eight; and Barbara Philipson who, along with Margaret, was another of the United Universities group that competed from 1960 to 1965.

The photo at the top of this page shows, from left: Christine Peer, Christine Davies, Barbara Philipson and Margaret Gladden, waiting for the march past in the opening ceremony.

At this time the Amateur Rowing Association was not a membership organisation; clubs and regattas were affiliated to it but there was no relationship between individual rowers and the ARA until 1987. Consequently the only communication channel from the ARA was to club secretaries, and as a single sculler doing her own thing in Manchester, Margaret Gladden was out of the loop. Her simple solution was to register her own club (which didn’t bring with it any of the obligations that it does now in terms of Safety Audits and so on) so she could get the information she wanted. She called it Jessamy Scullers after Jessamy Road, the access road to Weybridge RC, as she had fond memories of training camps in Weybridge when she was at ULWBC, as well as liking the pretty name. The club’s official colours were pink, white and grey which were those of her favourite nightdress, according to Christine Davies.

Margaret trained out of Runcorn RC which rows on a canal near a chemical factory, and at that time the water was reputed to be rather acidic because of the plant’s discharges into it. It was not a good environment for wooden boats (never mind the rowers) – Christine Davies remembers that, “Your riggers went green!” and Christine Peer recalls that Margaret actually had two sculling boats as a result, one that she trained in, and one that she kept for racing elsewhere which had undamaged varnish.

After their late decision to double together, the two Christines needed a competitive boat. Christine Peer’s father-in-law Bill Peer (coach of the 1966 St George’s LRC eight that represented GB) generously came to the rescue by buying them one, which was built and delivered at top speed.

In a fine example of lift-sharing long before the term was invented, the two British boat were taken to Amsterdam where they hitched a ride on the Dutch trailer.

For reasons that are hard to imagine and haven’t been recorded (perhaps it was the only practical option), the three athletes and John Peer drove the 1,000 miles to Hungary. Christine Davis recalls that, “It was like going into a different century,” once they reached the Hungarian border. “There was only one major road through each town so most of the roads were just earth and there were water pumps at the corner of the streets and driving there, there was more horse-drawn traffic in the country or ox traffic than there was [motor] traffic. I can remember once instance when [John] misjudged things a bit and had to pull in rather quickly having overtaken [a cart], and Margaret said, ‘That horse breathed in!'”

The scullers and their boats arrived on 15 August, giving them several days’ training before racing started.

Margaret Gladden (ninth out of 13)

With 13 entries, this event had heats, a repechage, semi finals and then the final and petite final. With three qualifying directly from the heat to the semi it was worth trying to avoid having to go through the rep that was scheduled for later on the first day. Margaret managed this by 0.68 seconds, hanging on after a late charge by the Hungarian on whom she had been nearly four seconds up at half way.

In her semi, though, she “was not sculling with the skill or awareness she had shown earlier in the year at Amsterdam,” according to Barbara Philipson, and “surprisingly” finished on the wrong side of a close verdict, missing out on a place in the main final by just 1.4 seconds. She came third in the small final, behind the Romanian and the Czech scullers and all three finished within 1.23 seconds of each other. 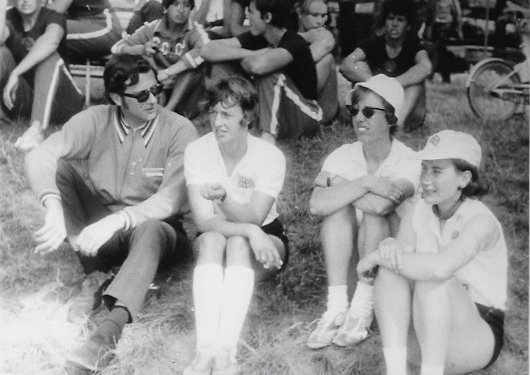 Double scull (unplaced out of 15)

According to Barbara, “Having only had two races together before the Championships… in the heat [the double] sculled sensibly and assessed the opposition.” Or, as told by the results, they were last out of five.

In the repechage that same evening, “At 500m they were behind the leaders [2.32 seconds off the critical third qualifying spot]. At this point they began to scull strongly and had overtaken the West Germans to take third place in the race and qualify for the semi-final. However, five strokes from the finish they caught a crab and were passed by West Germany who entered the semi-final by 0.15 seconds.” The GB crew were eliminated. The crab was almost certainly provoked by strong cross winds. Christine remembers, “It was extraordinarily rough. They wouldn’t row in those conditions nowadays. We were sent out into these great big waves! It was atrocious.” Unfortunately for her, similar bad conditions dogged most of the rest of her international career.

Christine Peer remembers an incident from after the finals the next day; “A vivid memory was of being in our room and hearing the East German coach next door, yelling at his crew because they had got a silver and not a gold. The girls were in tears. Chris and I would have happily settled for any sort of medal.” 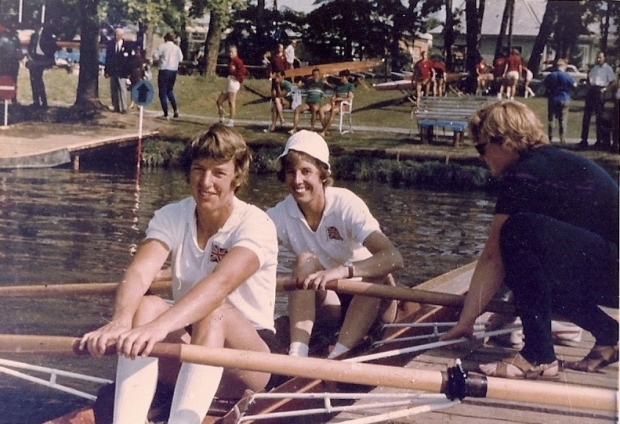 Being a doctor, Margaret was very concerned about a cholera outbreak in Eastern Europe shortly before the Championships. As a result, Christine Davis recalls, “When they gave us grapes for dessert she insisted that first of all they were washed in tap water and then they were washed in boiled water before we ate them!”

These were probably wise precautions as hygiene standards were certainly questionable at the Western countries accommodation. (The Easties were housed in an agricultural college nearby – well away from exposure to decadent bourgeois pyjamas, presumably.) “It was at a sports centre, and the smell in the showers… wasn’t really very nice,” Christine remembers. “And the food – we’d have chicken soup to start with, and it had the claws of the chickens floating in the soup!” The chicken feet clearly made a big impression because they’re one of Christine Peer’s clearest memories too, and just part of their ongoing struggle to get even vaguely suitable nutrition. “We went down to the only shop in the area and bought jars of jam and white bread just to have a taste of something sweet and satisfying,” she explains, adding, “It was a very medieval period in Hungary then. I watched from our window two ‘baboushka’ women building by chopping stone lumps into bricks.” 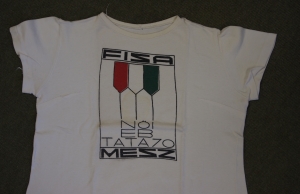 One of the few advantages of having traveled out to Hungary by car was that they were able to drive into Budapest for a day trip which Christine Davies particularly enjoyed although as Christine Peer remembers, they were constantly followed; “We were always escorted by Russian and Hungarian soldiers, even to the opera. We met up with a Scottish friend who had rowed for Scotland in the Home Countries and now had married and lived in Budapest. She insisted we talk in the open away from anyone. It was very much a difficult time.”

The Amateur Rowing Association’s International Fund spent £554.73 on the team’s attendance at the Championships.

Margaret Gladen’s home video of the trip shows the many contrasts involved from majestic architecture to ox carts, the tiny size of the three-woman GB team compared with the full complement of Russians, and the slight physique of the British scullers relative to other nations’ competitors.