The photo at the top of this page shows Alison, Jane Hall, Annamarie Stapleton and Tonia Williams on the medal podium after winning the lightweight coxless fours at the World Rowing Championships in 1993 and is from Alison Purnell’s personal collection.

Alison grew up aware of the sport of rowing because her dad had coxed and rowed for Keble College, Oxford, so she decided to give it a go herself when she went to Reading University in 1981 to study modern languages. The women’s boat club there was quite low key for all the time that she was a student. “We didn’t win anything for ages,” she recalls, “And I can distinctly remember our coach at the time saying to me, ‘You’ll never get past Senior C because of your height.’ That really annoyed me, and I always think that simple statement made me want to prove him wrong!” 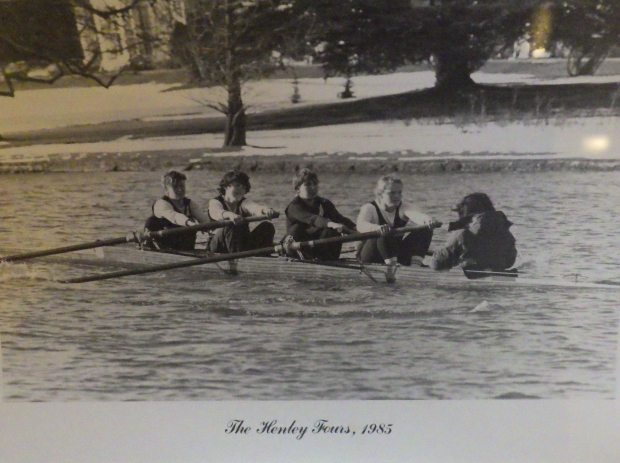 Wilma at bow in a Reading University Women’s BC crew at Henley Fours Head in 1985. (Photo: Alison Purnell’s personal collection.)

She stayed in Reading after graduating, and carried on rowing for the university club once she started work because it then started to take off, and also rowed with Staines RC where she was coached by Ian Shore who encouraged her to do GB trials.

Alison won her first National Championships medal – a silver – in 1986 in an openweight quad (although there were only three entries), and her first gold in a GB lightweight development four. By this time she’d moved to London because she realised that’s where she needed to be to further her rowing career. “My pairs partner, Cathy Walker, had started taking me to various squad trials, and I’d also done a really, really good ergo test which got me noticed by the GB lightweight women’s coach, Bill Mason, who was to later play a pivotal role in my rowing career as inspirational, trusted coach and motivator. So I decided to change career and I did an IT training course because I thought I’d be able to find a job in that quite easily.” She was offered a role at Moore Stephens where she’s remained ever since (althouh since the merger of Moore Stephens London office with BDO in 2019 she now actually works for BDO), and joined Thames RC. 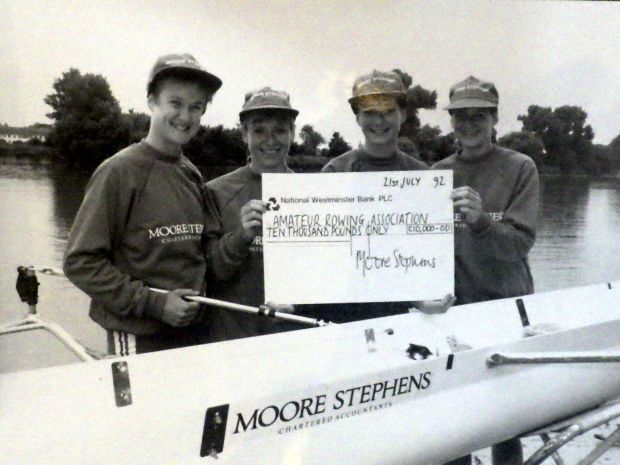 During the 1989 and 1990 seasons she rowed in the GB second lightweight four at early-season international regattas and even took part in trials for the double scull, but couldn’t quite break through to the World Championships squad.

Around this time Alison became known in the rowing world as ‘Wilma’ after the character in The Flintstones which was constantly on TV around then. “It was during Henley time, and we’d been out training and then gone back to a friend’s house to get glammed up for an afternoon in the Stewards Enclosure. I’d gone upstairs in my rowing kit and then come down in my dress and everything, and my friend Lance said, ‘Oh, you look just like Wilma Flintstone!’ And it just stuck and everyone started calling me Wilma. It was the era of nicknames – almost everybody who rowed had a nickname, either funny, rude or just pointless, so I got off quite lightly!”

‘Wilma’ was finally selected to row in the GB lightweight four in 1991 which was a ‘restart ‘ year, in a lot of ways, with many of the previous lightweight rowers moving on to other things and also a change of coach. That said, she had to fight to be kept in contention after a steering disaster at an early-season trial. “We were doing various scratch pairs and were being timed going up and down the lake in Peterborough.,” she explains. “The clock was stopped while you turned round, but you were only allowed to spend a certain amount of time doing that. Well, one of the combinations I was ended up half way up the sloping back at the end of the course, so we took too long turning round and that skewed the results so I was taken out of the equation for the sweep rowing and put into a double for the first international regattas that year. I just remember arguing with the coach because it wasn’t right and as I proved later on I should have been in the crew.”

Her four, with Katie Brownlow at stroke, Annamarie Stapleton at 3, Claire Davies at 2 and Wilma rowing at bow and also steering, won the silver medal in Vienna. “I can’t actually remember much about the race now,” she says, smiling, “But afterwards it was just amazing, really, really amazing!”

The 1991 silver medal was a joy for all of them, but when almost the same crew (with Tonia Williams instead of Katie) got another in 1992 it was a bitter disappointment as they’d led the race until the last few strokes when the Australians just managed to get past them. There were various factors which contributed to this.

In 1993, with Jane Hall now in the crew instead of Claire Davies, they had a “golden year” – both literally and figuratively – getting everything right, and winning the first GB women’s sweep gold medal. “We were on a roll right from the beginning,” Wilma remembers, adding, “And afterwards we got invited to the BBC Sports Personality of the Year and that was also the year I met my husband, so that just topped it off!” Wilma and Annamarie also became the first British women to have won three World Championships rowing medals.

The same crew remained together in 1994, when they won their third silver medal which they were relieved to get after a season beset with difficulties. With four medals apiece, Annamarie and her crewmate Alison ‘Wilma’ Brownless further cemented their standing as the most successful British female rowers ever at that time.

The lightweight coxless four project came to a natural end after 1994. Annamarie moved into the openweight eight that was seeking selection for the 1996 Olympics in Atlanta, and although Wilma and Jane rowed in this too at the Women’s Eights Head in 1995, they elected to remain lightweight and won another silver medal at the World Championships, this time in the new lightweight pairs event. As Annamarie’s eight didn’t medal, Wilma became the first British woman to win five Championship medals.

In 1996 Wilma and Jane switched to double sculling because a lightweight doubles event was going to be included in the Olympic programme for the first time. Although they both had reasonable sculling experience, they were much more comfortable as sweep rowers, so arguably they should have moved into the double the year before, when there was an opportunity to qualify the boat for the Olympics at the World Championships. Looking back on this decision now, Wilma admits that it was probably a mistake. They tried to qualify at the second opportunity in June 1996 and missed doing so by just 1.27 seconds.

Instead they got back in their pair and won another silver medal at the World Championships bringing Wilma’s tally up to six, a record which wasn’t exceeded until 2007 when Jane and Katherine Grainger (in different crews) both won their seventh World Championships/Olympic medals.

Full accounts of each of Wilma’s years rowing for Great Britain can be read here:

Later rowing and other sport

Wilma decided to retire after the 1996 Worlds, at least partly because she couldn’t face the prospect of another winter’s training at that level, but she kept on rowing for another year at Thames, and had a thorough enjoyable season which included winning the Women’s Head, as well as both Open Coxless Fours and Open Eights at Henley Women’s Regatta with her former international crewmates and great friends Annamarie and Claire and others.

In recent years she and her family have become serious triathletes, amassing a collection of medals (amongst them her World Silver medal at in the age group standard duathlon in 2018) which almost rivals her rowing haul, some of which are she keeps on display in a clever ‘medal table.’

In recognition of her achievements, the sculptor Allister Bowtell, who was a fellow member of Thames Rowing Club, created a bronze bust which remains prominently displayed in the bar at the club.