Katie is on the far right of the photo at the top of this page of the silver medal GB women’s lightweight coxless four on the presentation raft at the World Championships in Vienna in 1991, and is from Claire Rimmer’s personal collection.

Katie took up rowing when she went to Southampton University to read French and Spanish in the Autumn of 1982. “I decided to try it because my grandfather, my father and and my brother had all rowed and were encouraging me row, so I thought give it a go and then I could move on and do all other things I wanted to do.” This is what she did, although the rowing phase turned out to last over 10 years.

She doesn’t remember rowing at SUBC being particularly serious at the time, and thinks that the bar was as much a feature as actual rowing on the water. The Almanack records her notching up two or three wins in a coxed four. Katie adds that Rosie Mayglothling, who was the National Coach in charge of women’s rowing at the time, came on a a talent-spotting visit, “But she completely missed me then for probably very good reasons!”

When she graduated in 1986, she had no idea what she wanted to do next, although her best friend still maintains that, during a general ‘what are you going to do next’ discussion, Katie declared, “I’m going to go rowing and I’m going to the Olympics,” although she herself has no recollection of this. Hold that thought, though.

She moved to London and joined Thames RC on the advice of advice of her godfather, John Pearson, who was a member of London RC and knew Pauline Rayner (whose husband was a LRC stalwart) there. Pauline welcomed Katie into the club, as she did so many other future internationals and other new members over the years.

By the 1987 summer season, Katie was performing at a totally different level, racing at Ghent, and winning the silver medal at the National Championships in a coxed four with Lizzi Chapman, Caroline Christie and Kate Miller, a crew known as the ‘Good Time Girls’.

Katie (back left) with the Good Time Girls and their coaches Tessa Millar and Martin Levy at Newark Regatta in 1987. (Photo: Kate Miller’s personal collection.)

“We were the first Thames crew to wear lycra I seem to remember and liked it a lot,” Kate says.

In the autumn of 1987, someone at Thames told her that she should go along to the open GB trials as a lightweight. “I’d never heard of lightweight, in fact I hadn’t even heard of Steve Redgrave – I really, really wasn’t that engaged – but I said, ‘Oh, OK,’ so along I went. and afterwards various people said, ‘We noticed you because you just didn’t stop pulling,’ which was true, but simply because I was the only one who hadn’t worked out that you don’t have to pull in all of the seat races. I spent my whole career not working it out and just pulling because I didn’t have a clue how I was doing, actually. I always thought I was going to be out, so that’s why I always tried hard.”

By this point, Katie had moved into a well-known shared rowing house that belonged to the legendary Tideway Scullers School coach Alec Hodges, where Alec’s daughter Gill, herself a former international rower, also lived. Katie explains, “I’d grown up abroad, so I had no idea about London and I have no sense of direction, so all the time I lived in London I carried an A-Z around with me because most of the time I didn’t know where I was! Gill was a tremendous support, especially when I had to lose some weight to go lightweight because I used to do a lot of running, which I liked, she would cycle with me to show me the route. I probably did two or three half marathons a week but I would have finished up running several marathons in one night without Gill because I’d have got so lost!” 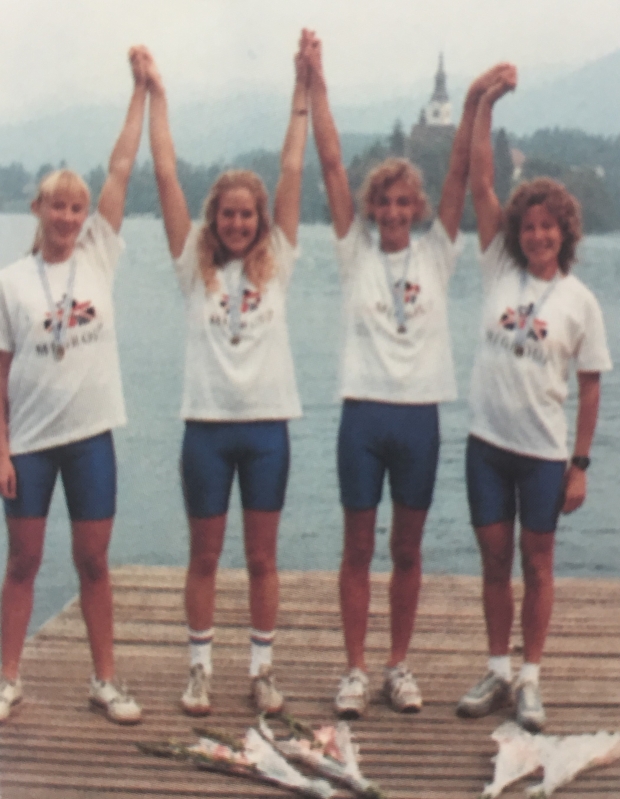 For the first three of Katie’s GB lightweight years the crew was largely the same, but in 1991 three new women came into the boat. This crew gelled more that the others had, and they remain firm friends today, a factor which they all think contributed to their success. Was it hard work to have to start again with a new group? “Not at all!” Katie says. “It was so much fun I didn’t care. It was great! We had fun from the beginning.” 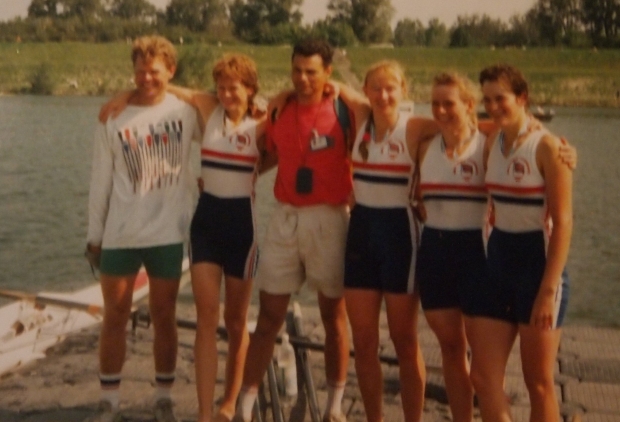 During the 1991 season, Katie was working at the British Olympic Association which gave her the flexibility she needed to train. This had the ‘fringe benefit’ of giving her access to sound nutritional advice. “I was starting to struggle to keep my weight down; maybe we’d been doing more weight training, or maybe I wasn’t doing as much running.  So I’d got to the stage where I was eating badly, like nothing but stewed rhubarb with low-calorie sweetener for two weeks. When Kevin Hickey (the Technical Director at the BOA, who was my boss) found out, I was in luck; he was spearheading the links between sports associations and technical assistance from psychologists and nutritionists and so on, so he marched me off to the nutritionist Jane Griffin and from that point forward I had no weight issues. It was still tough – I had to weigh everything I ate, but it was healthy and balanced.

After the 1991 World Championships Katie started training with the lightweights in the autumn again, but was soon invited by Bob Michaels, by then in charge of the GB women’s openweight Olympic team, who had coached her lightweight crew in 1989 and 1990, to join his group, perhaps making her GB women’s rowing least ambitious Olympian in terms of not actually having put herself forward for selection, despite her apparent declaration when she was a student. “I think maybe he felt he didn’t have enough people who were strokes, or he wanted them to be powerful in the middle of the boat, so he’d bring me in because I was used to stroking.” All of Katie’s crewmates over the years, both lightweight and heavyweight, confirm that she was an excellent stroke, although she’s not sure why she was. “I’ve always been quite independent, doing my own thing, so maybe that’s it,” she says, adding with typical modesty, “But actually, I don’t think I ever got put anywhere else. Even at university I was at stroke, so for all I know I might not have been any good at following, because I never tried.”

However, soon after this, Katie had problems with her back and was told that she either needed to take a year out of rowing or have surgery. “I thought, ‘OK I’ll take the operation and I’ll see what happens,” she remembers, adding, “I was incredibly fortunate again to have Kevin as my boss at the BOA because he organised for me to spend I think three weeks at the Football Association rehabilitation centre having intensive physiotherapy every day. That made a huge difference and also, Ann Redgrave, who was the team doctor, was also a fantastic osteopath so I was phenomenally lucky in terms of the care I got but I do think it’s a bit ridiculous that I was in the boat at all after all that. I would have understood if I hadn’t been.”

Katie (left) with Kate Grose on a pre-Olympic training camp, walking in the mountains neat St Moritz because the lake was too windy for them to row. (Photo © Annabel Eyres.)

Full accounts of Katie’s years in the GB squad can be read here:

After the 1992 Olympics Katie returned to the lightweight squad, taking part in trials, and going on a joint Easter training camp at the Bosbaan course in Amsterdam with Imperial College, as Bill Mason, who was coaching the GB women’s lightweight four was also the head coach at IC.

“Although I didn’t realise it at the time, that camp was where it started to become clear that I’d had enough,” she explains. “In the past I’d always been incredibly focused at training camps like that… this time I was going out in the evenings quite a bit more than I would ever have done before. I also started thinking about the endless training and dieting and racing that we’d be doing each month for the rest of the year – and saw my year stretching out ahead of me, with its predictable schedule of training and racing. Anyway, at the end of the camp I drove the boat trailer back to the UK, parked it at Putney in the rain, and went home, and when I got up the next morning and pulled up my blind I realised I’d given up rowing and it was as straightforward as that! I went downstairs and told my housemates, who were all rowers, ‘Oh, I’ve just given up rowing,’ and they were overjoyed – I’m not sure what that says! I then had to break it to the crew and to Billy, and that was that. I’d had a blast, but there were so many more things that I wanted to do as well. It was definitely time to get on with the rest of my life.”

When pushed to reflect on what she’s proudest of in her rowing career, unusually amongst her rowing peers and particularly for a multiple medallist, Katie cites the friendships that she made, particularly with the 1991 lightweight four, but others as well. “I think that that’s what really resonates and warms me,” she says. “I only see my rowing friends occasionally now, but the connection remains strong. When I do make it to Henley and see people you have something to talk about and I think that’s really lovely, and for me that’s been the best thing about it.”

She also recognises the skills and qualities she developed through rowing. “It’s given me a level of stamina and a level of confidence without being arrogant; a willingness to try things which I think has been a thread through everything that I’ve been doing since which means I don’t mind if I fail, and if I succeed, I’m really happy.

I also appreciate bringing people along, doing things with people, so all of that, that teamwork, as well as the ability to be independent and to focus, all of that I think comes from the training and the rowing, and those are the things that for me are the most valuable.”

Katie moved abroad within a couple of months of finishing rowing, travelling and working over a number of years across South-East Asia and Australia for several years, sailing to New Zealand, and eventually ending up in Southern Africa. She now lives in Mozambique where she has been involved with a range of public health projects that led to her being awarded an MBE in the 2013 New Year’s Honours List for services to the prevention of malaria in Mozambique.