Flo’s on the right of the photo at the top of this page, taken just after she and Pauline Bird had qualified for the final at the 1986 World Championships. (Photo © John Shore.)

Fiona, known to everyone in the rowing world as ‘Flo’ [how this came about will be explained shortly – Ed.], took up rowing after a chance encounter on a riverbank. “My older brother rowed at Sir William Borlase’s school, and so I got dragged along to all these regattas and at one of them I was just standing watching and an old bufty came up to me and said, ‘Young lady, you should be in a boat!,’ because I was about 14 then and was already 5’9″ or so,” she explains. Despite not having noticed any girls rowing, she and her friend Anna ventured down to Marlow RC where they were told to come along the following Sunday morning at 10am. “We looked at each other and said, ’10am? On a Sunday? You’ve got to be kidding me!, but we went, and it turned out to be the first sport I discovered that I was OK at, because being tall at school you’re always put at goalkeeper in the netball team, and I didn’t really enjoy netball, I didn’t like hockey because it involves too much bending down, and swimming was alright but I was a bit self-conscious. I’d done a lot of dancing when I was younger but I just grew out of that. I remember going to get some new tap shoes and the lady in the shop asking what size I needed and then just bursting out laughing when I told her because all the shoes were for petite little girls and I was suddenly this great big thing.”

After a few sessions in playboats and then in a tub pair, Flo and Anna formed a four with two other girls, coached by Fred Taylor, the father of one of the others. “There were only about ten women in the whole club back then in the early 1980s, and I have to say it was a little bit chauvinistic; nobody really helped us with anything and they only really got behind us when we started winning, but Fred was really enthusiastic and he really wanted his daughter to row,” she remembers.

In due course, the four disbanded, but Flo carried on rowing with three other girls at the club, all of whom went on to represent GB at junior or under-23 level. They were coached by Geoff Baker, who had coached the GB women’s quad in 1977, and ran up and down the river bank with then rather than cycling, as most coaches would.

In 1983 and 1984 Flo’s new four represented England at the Anglo-French match (which had races for J18 as well as J16 crews at that time), winning gold in the second year when she was 17. “That was very exciting because it was over in France and we had blazers with badges on, and we wore these with skirts and white blouses for the meal after the event. But French were still in their kit and looked terrible!,” she recalls. But, she adds, “There was wine with the meal because the French do that and all the smart-looking British kids finished up being very badly behaved because they got drunk and all the French kids who looked very scruffy were sophisticated because they knew how to drink.”

Although Flo enjoyed her rowing, she didn’t have any particularly clear ambitions at this point. This changed completely when the town of Marlow arranged for an open-topped bus tour to celebrate local man Steve Redgrave’s gold medal at the 1984 Olympics, the first Britain had won in rowing at a Games since 1948. “I remember standing in the high street and watching this bus go past with Steve Redgrave and Belinda Holmes on the top – Belinda and Steve were going out then, and she’d been in the women’s eight in Los Angeles, and I thought, ‘Oh my goodness, I would LOVE to go to an Olympics! That was the moment, so I got in my single scull and started training hard,” Flo says, adding that her parents had bought her a second hand boat which, “Was supposed to be my 18th and 21st birthday present – it was a wooden Sims and I LOVED it, I just loved it.”

Her performances at some of the autumn sculling heads encouraged Belinda, who was training in a single too, but preferred crew rowing, to invite schoolgirl Flo to pair with her. They trained out of Mike Spracklen’s house, which backed onto the river on the Longridge stretch just down from Marlow, along with Steve Redgrave, who was singling, as well as Adam Clift and Martin Cross who were also in a pair. “I already knew Mike Spracklen a bit because I was at school with his younger son, and back in those days you called your friends’ parents Mr or Mrs, so I rocked up at Mike Spracklen’s house calling him Mr Spracklen all the time and it became a bit of a joke,” she says. “The three of them kept saying, ‘For goodness sake, just call him Mike,’ but I couldn’t bring myself to do it until one day it sort of slipped out, and everyone went, ‘She’s done it!'”

“Training with them was definitely a bit of a baptism of fire,” Flo admits. “I would cycle home between outings for tea and toast and I’d wail, ‘I’m not going back, they’re so mean to me, and it’s hard work and look at my hands.’ But then after an hour I’d be, ‘OK see you, I’m off for my second outing!'”

Flo attributes some of her later success to the coaching she’d received right form the beginning. “Mike was an amazing technical coach, and Geoff Baker, and Fred Taylor was fantastic as well. I was never the strongest, definitely never the strongest, but I do think technically I was probably up there because of them. It was very much being in the right place at the right time, and I was very lucky to get picked up by Belinda and Mike and everybody.”

Flo and Belinda were selected as the GB pair in 1985, and she went on to represent GB in 1986 (when she also rowed for England at the Commonwealth Games), 1988 and 1989. Full accounts of these years can be read here:

It was while she was pairing with Pauline Bird in 1986 that Flo picked up her nickname. “She would never call me Fiona for some reason. So up until that point I’d always been Fiona, but she called me Floella, or Floelina, or Flossie or silly names like that,” Flo says. Pauline adds, “It was just a bit of fun banter between our coach, Mike Genchi, and me, and just kind of stuck.” 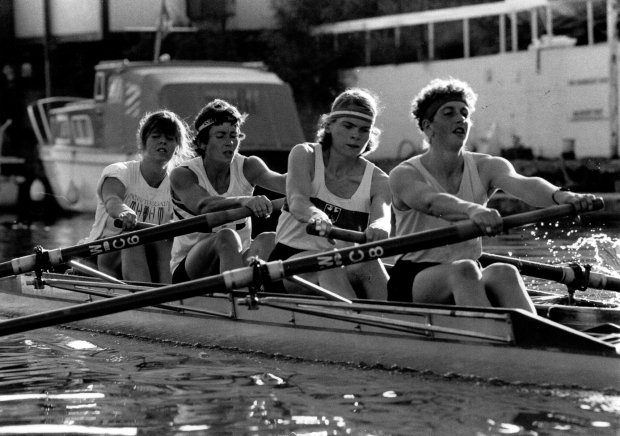 Flo was dropped from the squad in 1987 through no fault of her own when her pairs partner, Pauline Bird, with whom she’d reached the final of the pairs at the World Championships the previous summer decided to withdraw during a set of trials. She finished up rowing in the Under-23 coxed four that year. After this, Jean Genchi, who had rowed at the 1984 Olympics, and whose husband had coached Flo in 1986, coached Flo in her single (while Flo’s mum looked after Jean’s young baby), and she got back into squad the following year in time to realise her dream and go to the 1988 Olympic Games.

After competing at the Worlds in 1989, Flo did start the trials process again the following year but, she says, “My heart wasn’t in it, and it showed! Every pair I got into went backwards, and anyway I couldn’t ever see that we would ever win a medal. Plus there was a whole bunch of keen new girls,” she remembers. “Of course, I didn’t know that the wall was going to come down and lottery funding was going to come, but actually I’d just had it up to here. I remember sitting on the start of some race at Nottingham in a double and thinking, ‘I really don’t give two hoots whether we win this or not,’ and that’s when I knew and I said to myself, ‘OK you’ve got to stop this now.'” She did get as far as being invited to the June closed assessment in 1991, though, and was also tempted by the lure of the 1992 Olympic Games, taking part in the first two open assessments that year too, not to mention three separate ergo tests. Although she performed reasonably, it wasn’t really well enough to pick up where she’d left off, and that was finally the end of that.

After doing a little coaching at Kingston RC in the mid 1990s [including, briefly, a crew coxed by the author], Flo stopped her active involvement with rowing while she had her children, but got back into coaching again when they rowed for a while at Guildford RC. Although neither row any more, Flo still coaches the juniors there, and thoroughly enjoys it.

Flo trained and worked for many years as a graphic designer. She was one of the founding partners, in 1988, of the much-loved rowing clothing and gifts business Rock the Boat, which she and Annabel Eyres started to raise money to fund their rowing.

She recently completed a two-year diploma in contemporary portraiture, which culminated in her painting six of GB’s top rowers – Kath Grainger (shown below), Heather Stanning, Rachel Morris, Pete Reed, Moe Sbihi and Will Satch – for her graduate exhibition. The studies are contemplative rather than triumphant in nature. “All through my rowing career I preferred training to racing, always,” she explains. “I loved the training but I always got very nervous for racing. And mostly in the press and the media you see people when they’ve won their medals and they’re looking very cheesy, biting their medal and standing on the podium, but you don’t really see the day to day grind or the low points, or that you’ve got to pretty much destroy yourself to come back stronger. So in this series I tried to do something along those lines; the rowers have all got their eyes closed, because the focus is on what’s going on in their minds.”

The rather edgy style of the paintings, which will be on show at Henley Royal Regatta in 2019, is the result of Flo applying the training concept of progressive overload to the process of creating the artwork; after partially completing each one, she then ‘damaged’ it before rebuilding the image again, much as rowers do with their muscles. Flo’s art work can be followed on her Instagram page. She takes commissions.