Penny was aware that rowing existed from an early age as she grew up in Oxford and her father, who had rowed for his college ‘rugby eight’, used to take her down to watch Summer Eights.

When she went to Clare College, Cambridge, where she read natural sciences with a focus on biology, she took up rowing herself and got into Blondie (the university women’s second crew) in 1978 and then the Blue Boat in 1979, winning on both occasions. After the second of these Dan Topolski asked the crew if any of them would be interested in trialling for GB, starting in the autumn, and encouraged them to go to Ghent regatta to get some more racing experience, which they did. Penny remembers that she was the only one who was initially uncertain about the idea of trying to get into the national squad (because she’d already arranged to go to Africa on a scholarship), but in the end, “Was the only one who did anything.” 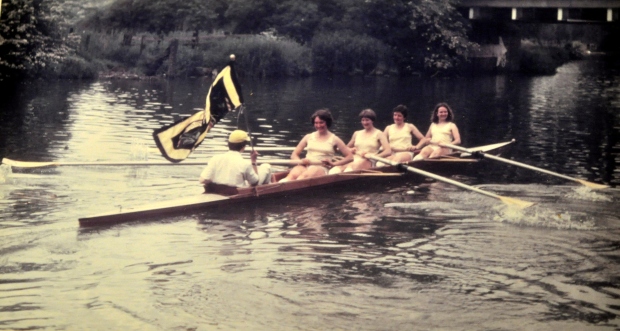 Penny (at stroke) celebrating having gone Head of the River with Clare College in 1979. (Photo: Penny Vincent-Sweet’s personal collection.)

She then moved to London, got a job assisting an occupational therapist at Southwark Council (on short term contract which ended at Easter as she needed to be available full time to row after that), and rowed out of the Amateur Rowing Association boathouse at Hammersmith.

As a result, she explains, “I never needed to join a normal club, so I went to the Olympics as Clare Relics BC, which was my college’s alumni club. The boat club treasurer said to me later, ‘It was all very well getting all the glory and everything, but it meant we had to pay the ARA affiliation fee for Clare Relics, just for you!'”

After Penny took up rowing in Cambridge her mother, who had gone to Oxford University, admitted that she too had rowed as a student and had been chosen to row against Cambridge. However, because the male-dominated university establishment in those days considered (not based on any actual medical evidence) that rowing could be ‘bad’ for women, the crew had to go for a medical checkup. Penny’s mother was running late, and had to cycle hard to get there in time, and as a result the doctor decided that she had a heart problem because it was beating so fast, and so was taken out of the crew on medical grounds.

Penny says, “She told me that she remembers seeing off her mates at the station – there was a direct Oxford-to-Cambridge train in those days – with their oars over their shoulders because they took those with them but borrowed a boat from Cambridge. The race was alternately in Oxford and in Cambridge.”

Penny started rowing with the squad in the autumn of 1979 and took part in the huge amount of seat racing that the sweep group did throughout the winter. She was eventually selected for the eight (which was the top boat), which came fifth at the Olympics in the summer of 1980.

A full account of 1980 season and the GB women’s rowing team’s experiences at the Moscow Olympic Games can be found here. 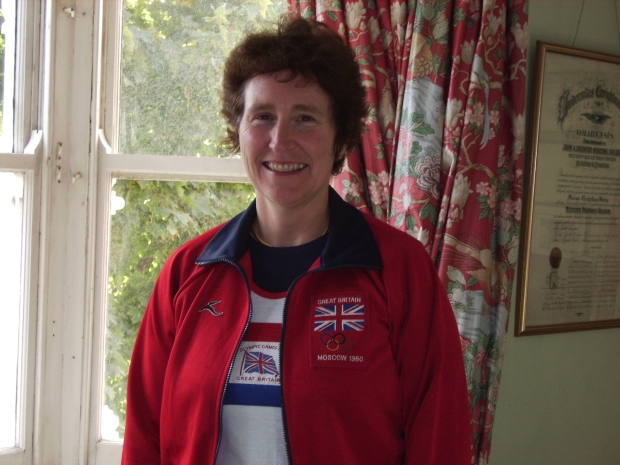 “When we came back from the Olympics, I just got home to an empty house and it was a bit of a let down after all of those crowds!,” she says. “So I went to Cambridge and somebody was going to a regatta and I latched on and borrowed a boat, a clinker boat, and won my novices.” [There’s no information in the Almanack as to where this might have been but not all regatta secretaries were as diligent then as they are now about submitting records – Ed.]

After the Olympics Penny went to Africa for eighteen months to do the project which she’d deferred from the previous year. “Then I did a course in Paris. I did go rowing once with the students but the boathouse was a long way out of Paris, it wasn’t really much fun, and it was a bit too soon after the Olympics,” she says.

Penny started rowing again in about 2003 when she moved to Grenoble in France and joined AC Fontaine Aviron where she takes part in all sorts of ‘aviron randonnée’ (touring rowing) trips that have included coastal rowing and also doing the Vogalonga in Venice. “I think it’s brilliant, and some of the meals we get in the clubs we visit have been superb!,” she enthuses.

Penny (at stroke) and her husband (at bow) sculling with her club on the Isère near Grenoble in 2014. (Photo: Penny Vincent-Sweet’s personal collection.)

When the World Rowing Championships were in Aiguebelette in 2015, about an hour’s drive from her home, Penny had a volunteer role in the FISA office and her 1980 crewmate Rosie Mayglothling, who is a FISA Official, greatly enjoyed having the opportunity to work with her during the ten-day regatta.

Although the “absolutely amazing” experience of competing at the Olympics was certainly a highlight of her rowing career, Penny says, “Going head of the river with Clare College [in only the fourth year they had women] was maybe even better,” although she adds, “Winning the Boat Race was a third pinnacle, of course!” Her serious rowing career was quite short, but she certainly packed a lot into it.

In 2011 Penny was thrilled that Clare decided to name their new women’s first eight after her and after the naming ceremony (see photo at the top of this page), showed the youngsters a thing or two by stroking the boat on its first official outing (or, as she puts it, “They patiently tried to follow me,”).

Penny stroking the just-named Penny Sweet that went Head of the River in Mays in 2013. (Photo: Penny Vincent-Sweet’s personal collection.)