The recent World Rowing Masters (which means old people unlike the golf usage which means the very best people, but they don’t have World Championships, of course) Regatta was extraordinary for all sorts of reasons – the stunning scenery, the absolutely vast entry of over 4,700 competitors, and the unfeasibly small number of portaloos will be etched for a long time on the memories of all of us who enjoyed racing there.

The substantial contingent of around 800 British rowers included a healthy number of our former internationals, possibly more in the women’s events than the men’s. I don’t think there were any members of our 1950s crews there, but Pauline Rayner and Jacqui Parry flew the flag for the 1960s; Jackie Darling, Gill Parker, Rosie Mayglothling, Pauline Peel and Jo Toch represented the 1970s and 1980s; and any number of women were back from the 1990s and early noughties including Miriam Batten (one of the crew that won GB’s first women’s Olympic rowing medal), Judith Burne, Naomi Ashcroft, Miriam Taylor, Nicky Dale, Helen Mangan and Felicity Medinnes-Leach, who was rowing for the German club Hansa Hamburg. 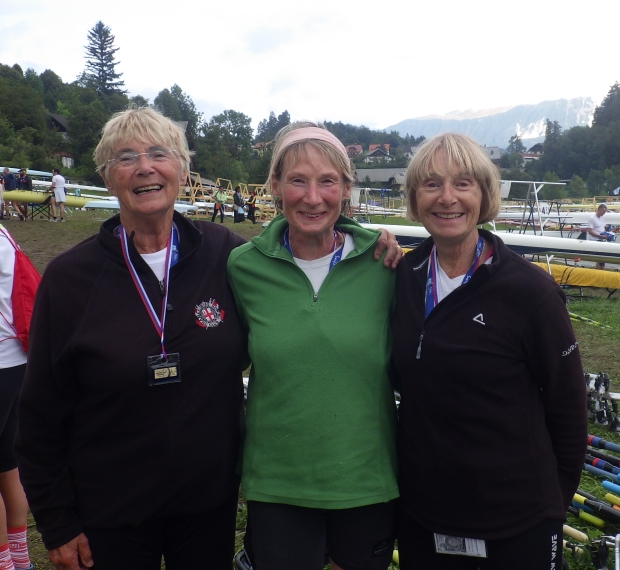 Great though it was to see so many former GB rowers thoroughly enjoying themselves and racing hard, with my historian’s hat on, the most interesting event by far was one that didn’t even involve any British competitors. This was the the Women’s I-J single sculls which, for those who don’t have masters ages at their fingertips, was a six-boat race that combined both the 75+ and the 80+ categories. An aspiration for us all.

The reason that it held such significance was because two of the competitors in it had also been contestants in key against GB’s first European Championships single sculls medalist Penny Chuter back in the 1960s.

At the World Masters 2017, some 50 plus years later, the race was won overall in some style (actually, 20 seconds is a LOT of style) by Meike De Vlas (born in 1942 and therefore racing Masters I), who was originally Dutch but became Norwegian following her marriage. Meike’s place in the annals of GB women’s rowing history was assured when surged up the sheltered inside lane in the last 250m of the European Championships in Amsterdam in 1964, overtaking Penny Chuter. De Vlas took the silver medal, and Penny came fourth.

Meike’s latest medal will take its place in her family trophy cabinet which, I can only imagine, must be of gargantuan proportions: her adopted nationality comes from her marrying Norwegian oarsman Hadriaan van Nes who won the silver medal in the coxed pairs at the 1968 Olympics, a feat then surpassed by their daughter Eeke who won a bronze and two silvers at the 1996 and 2000 Games.

The photo at the top of this page shows Meike De Vlas being presented with her World Rowing Masters Championships 2017 medal.

Back to the race in Bled, the fastest J sculler (coming third overall but also getting a medal because she was in a different category and there’s no point in wasting slots in a packed timetable when you can combine two events in one) was Renée Camu, a Frenchwoman born in 1936 who won silver at both the 1963 and the 1968 Women’s European Rowing Championships. Check out the video on the 1963 page to see the horrendous conditions in Moscow during the final, which led to the favourite falling in and Penny Chuter being blown onto a buoy of a size you really wouldn’t want to meet in a single scull and losing any chance of a place on the podium as a result.

Aged 17, Penny had actually beat Mlle Camu, who was then the French Champion, at her (Penny’s) first ever sculling race at Macon in 1960 which, she says, “Rather upset the applecart,” as the international scene had rapidly to get to grips with the hitherto unfamiliar concept of a competitive British boat! How wonderful to see the French sculler still racing, 57 years later.

The Victrix Ludorum trophy at this World Masters regatta was won by the women of Upper Thames RC (including internationals Miriam Batten, Helen Mangan, Judith Burne and Naomi Ashcroft). The idea of British women’s crews going fast is, by now, not in the slightest bit unfamiliar